Following my mid-week excursion to Earlham Cemetery, I returned on Saturday for a better look around. I met Ian Senior at the cemetery gates, which meant that I got the Smiths song of that name stuck in my head whilst I was waiting. Ian lives nearby, and was able to show me some interesting species that have recently emerged, including the one I was looking for on Wednesday, Fluted Bird's Nest.

The first place we went to was the area of unimproved grassland that holds a range of Waxcaps, Corals and Spindles. Most of the species were ones that I saw here last year, such as Meadow Waxcap, Parrot Waxcap, Slimy Waxcap, Blackening Waxcap and Meadow Coral (you can use the blog entry dates menu on the right of the blog to see last years entries if you didn't see them at the time). Amongst these there was a new Waxcap for me, Goblet Waxcap (Hygrocybe cantharellus), a small orangey-red species found yesterday by Ian. Another new species was Earthy Powdercap (Cystoderma amianthinum). 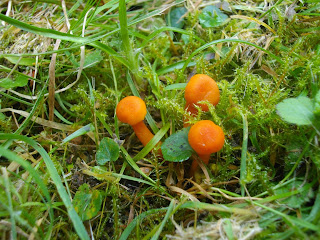 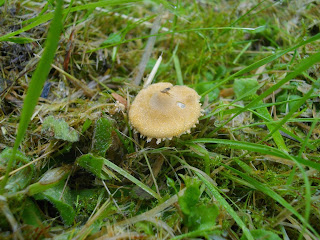 Heading to a disturbed area of ground we saw a range of plants, including an interesting grass called Orange Foxtail. I remarked that it was unusual to see Himalayan Balsam in this habitat and then we found another indicator that the ground was damp in the form of Marsh Cudweed. 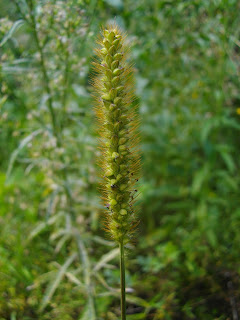 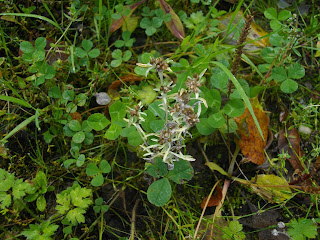 Heading across the road to the western part of the cemetery we went straight to the Fluted Bird's Nests (Cyathus striolatus). It turns out that I was in the right general area, but hadn't gone far enough down the road to see them. Further along we located some rather nice Bloody Brittlegills (Russula sanguinarius) growing in grassland near pine. 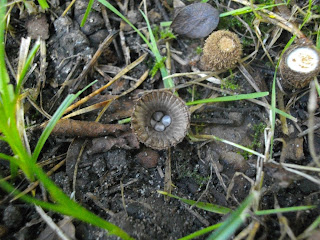 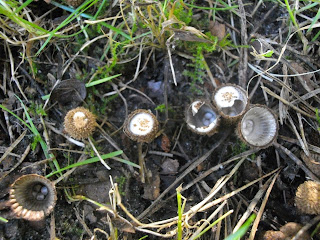 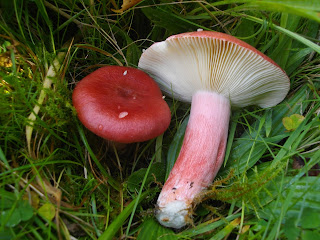 Walking back to the car we still had time to find one more new species, Frosty Webcap (Cortinarius hemitrichus). My thanks to Ian, without whose local knowledge and regular searching I wouldn't have seen many of these fungi. 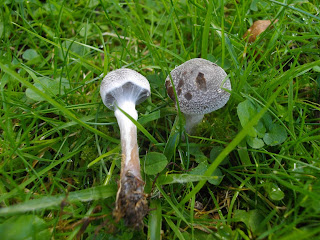