Another evening visit to Whitlingham, this time looking for mirgants. The closest I got was a Chiffchaff with a flock of tits in the conservation area, and a bird singing from deep in the bramble scrub that I think was a Whitethroat in sub-song. This time of year there is often quite a few large gulls washing in a pre-roost gathering during the evening, and looking through the mixture of Lesser Black-backs, Herring and Black-headed Gulls I managed to pick out a 1st-winter Yellow-legged Gull, my first of the year here.

In terms of insects, the highlight was Coremacera marginata, a Snail-killing fly sp. I had seen this species last month with Tim Hodge, but on that occasion it had flown off before it could be photographed. 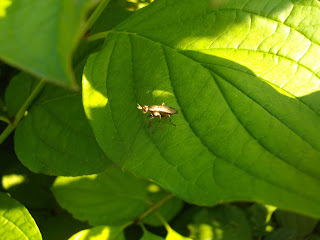 In terms of my patch list, I had to remove a species as a ladybird expert had a look at my Coccidula rufa record and pointed out that the antennae on my specimen were too long for this species. It looks like it is actually a Neocrepidodera species, but there are two and my photo isn't high enough quality to view the markings on the elytra and show which of the two it is. On the bright side I did add three based on specimens that I hadn't identified at the time, Nettle Ground Bug and two common mosses, Hypnum cupressiforme and Atrichum undulatum. Finally I made a point of going and looking for Fairy Ring Champignon (Marasmius oreades), which I'm fairly sure I have seen previously but not recorded. I saw some, and it becomes species 953.