Recently a friend of mine had been recording fungi at Earlham Cemetery and had found a species called Fluted Bird's Nest. This interestingly shaped fungus resembles a tiny dark brown bun case with small white or grey eggs in, and is one of my target species for this year. In the past some of the fungi in the cemetery have been destroyed by mowing before I have had a chance to see them, so I went to the cemetery after work on Tuesday to attempt to find the Fluted Bird's Nests.

I wasn't sure exactly where Ian had seen them, so I headed for an area of woodchips that seemed a likely place to look. On my way I stopped to have a look at some Death Caps, which seem to be having a very good year. 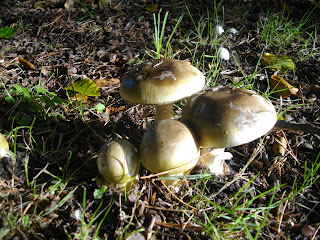 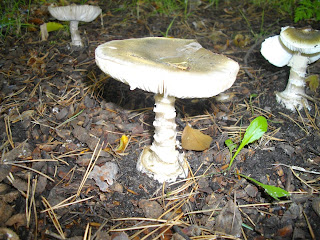 I scoured the woodchips without success, although I did see some Dog Stinkhorns, growing in the same place that I saw them last year. Having failed to find the Fluted Bird's Nests on my own I texted Ian for directions. He told me that he had actually seen them in the western half of the cemetery, so I crossed the ring road to look there. Despite finding the area of trees where they were growing I couldn't find the tiny fungi amongst the grass. I eventually gave up, but hopefully I will have time to return at the weekend and find them. 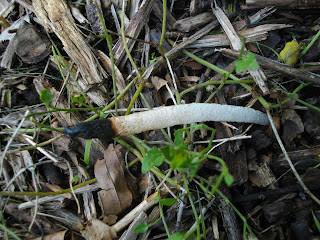 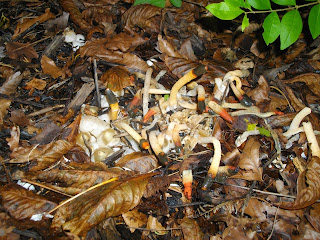