My birthday weekend, so I thought it would be worth going slightly further afield than Whitlingham. We settled on Cley, a reserve I have a good deal of affection for having been there for my first ever birding trip 25 years ago. Before going to Cley we stopped in at Bowthorpe Marsh (another of my favoured areas, having briefly been my local patch when I lived at Three Score). Our target was the returning Great White Egret, but despite it having shown well earlier in the morning there was no sign of it at Bowthorpe or further across on Earlham Marsh whilst we were there. We did get some nice views of some common  birds, including an obliging male Siskin that Cathy had heard call near to the path.

We arrived at Cley in time for lunch, although just too late to get a jacket potato. We almost couldn't sit down either, but a kind couple gave us their table as they were finishing up. A scan of the reserve whilst we waited for food turned up several year ticks (Brent Goose, Avocet, Shelduck, Wigeon). A redhead Smew had been reported on Pat's Pool, so we headed to Bishop's Hide for a look, but we couldn't see it, so we carried on to the Babcock Hide.

I hadn't been to Cley since the opening of the new Attenborough Walk and Babcock Hide on the recently aquired Salthouse Marshes. My main impression was one of lots of mud, particularly at the gate off East Bank. The pool in front of Babcock Hide (Watling Water) looks good, and in addition to the Grey Phalarope and Water Pipit, there was a range of waders feeding on the muddy areas. The hide held some familiar faces, including a UEA/NGB delegation planning their next heist twitch. 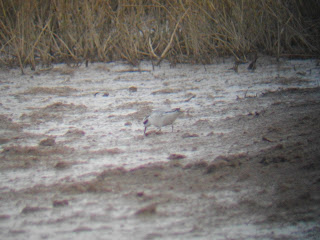 On the way back to the car I had a look at some of the yellow lichen growing on the scrub. I had hoped it might be one of the more unsual species, but I think it was just the common Xanthoria parietina. We took the coast road back and called in at Salthouse duck pond. There was nothing particularly unsusual, nor any colour-ringed gulls, but Cathy did notice a dark green Mallard that was differently plumaged on its left and right sides. 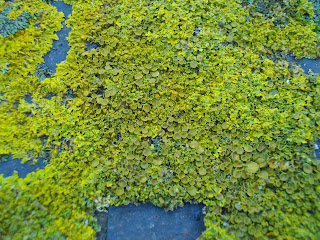