As part of the days birding I went to Whitlingham with Cathy & Margaret. A pair of Egyptian Geese and some Greylags were on the meadow opposite the country park, and a Jay flew across the road. As soon as we were out of the car there were Blue Tits, Long-tailed Tits, Goldfinches and a Goldcrest in the trees nearby. Walking through towards the Little Broad we stopped to look at some fungi, and looking up saw another Goldcrest and a couple of Siskin feeding quietly in an Alder.

A scan of the two broads added Tufted Duck, Common Gull, Moorhen, Coot, Mute Swan and great-crested Grebe before we moved on to the slipway. Three Canada Geese were present, but excitingly I noticed a Coot had a green ring on. I read it through bins before it went back into the water. I wanted to see it again to double check I'd got the code right, and luckily it did re-emerge. The code was white A164 on a green ring, and in the evening I reported it to the ringing scheme, finding out that it was ringed over the summer at Frederikstad in Norway. 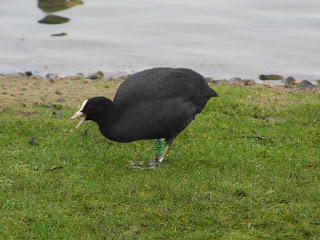 We carried on along the south shore, adding Lesser Black-backed Gull, Gadwall, Pochard, Shoveler, Herring Gull and Grey Heron. We stopped at the island, and I picked up two brownhead Goldeneye diving along the north shore. There was no sign of any Goosander, something later confirmed by Justin who had done a more thorough walk around the whole broad. We headed back to the visitors centre for a cup of tea, but before we got there we stopped at a large cut log. Cathy walked round it and found at least six species of fungi, including Olive Oysterling, Velvet Shank and one of the Eyelash fungi (Scutellinia sp.) 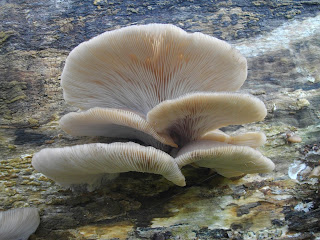 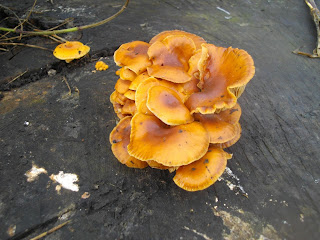 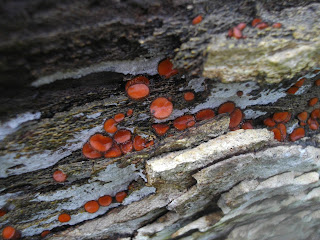 In total we saw 34 species + 1 heard only. The Coot was definitely the 'best' bird of the visit, although as I failed to see Siskin and Goldeneye here in January 2015 they were good to see too.
Posted by James Emerson