I had planned to head down to Whitlingham on Sunday, and a call from Justin telling me that he had found a female Pintail, a scarce bird locally, was further motivation. Firstly I headed back to Carrow Hill for a third unsuccessful look for the Firecrest. I gave it 15 minutes or so and walked down to Whitlingham. I took advantage of the sunny weather to look amongst the hedges for any early-emerging insects. I did see a couple of patch ticks, firstly Alexanders Rust (my eye was in for this having seen lots of it at Carrow Hill) but more pleasingly my first patch Kidney-spot Ladybird on some Ivy. 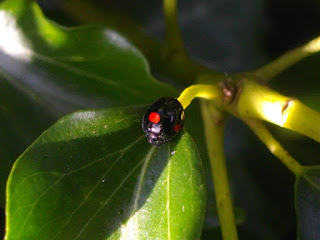 Along the Little Broad I saw my first Treecreeper of the year, plus a decent sized flock of Siskins. I headed round to the conservation area bay, where I scanned through the assortment of ducks. The most interesting thing was the number of Shoveler, there are around 20 present (possibly as many as 22) but the females in particular are hard to pick out whilst asleep. Despite scanning the edges and inlets I didn't see the Pintail. One drake Gadwall in particular had a rather pale face, although probably within range for this species. 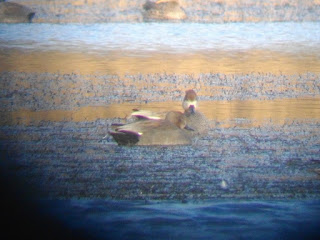 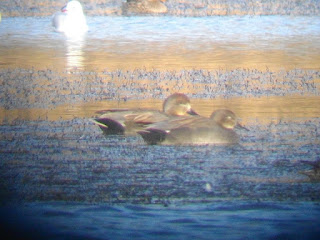 There were hardly any Pochard on the Great Broad today, it appeared that most had flown across to Thorpe Broad, as had at least one of the Goldeneyes. On the way back I stopped to watch some of the Cormorants going in to roost, and had a chat with Mark and another birder. Whilst we stood there a Kingfihser flew past a couple of times - they seem to be very showy this winter so far. There was a steady stream of Magpies flying in too, mostly in twos and threes, but I wanted to get home so I didn't stop to count them. It was dusk as I walked across Trowse Meadow, and dark by the time I got home. Roll on longer days.
Posted by James Emerson