Having looked unsuccessfully for the Firecrest, the next thing on Saturday's to do list was to visit Strumpshaw. Last February Ben had found a rare type of earthstar (Weathered Earthstar, Geastrum corollinum) on the reserve, and he had offered to keep an eye out in case it fruited again this year. On Friday he had found an earthstar in the same place, but wasn't sure if it was the same species. I had planned to drive us there, but on Friday night the car started making some unsettling banging noises when I started it, so Margaret kindly agreed to take us.

It started to rain as we arrived at Strumpshaw, but luckily it wasn't too heavy. After calling in at the reception hide we headed off and soon located the earthstar. As Ben had suspected it was an old specimen of Collared Earthstar (Geastrum triplex). It is not unsual for more than one earthstar to grow in the same location, presumably many of them have similar habitat requirements. We spent a bit of time looking around nearby, finding more than 10 species of fungi, which was good for the time of year. These included Scarlet Elf Cup (Sarcoscypha sp.), Crystal Brain fungus (Exidia nucleata) and Tripe Fungus (Auricularia mesenterica). 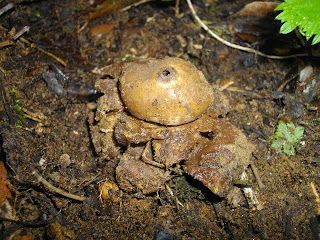 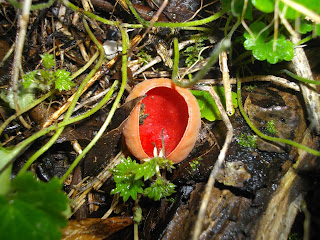 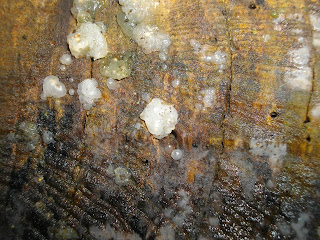 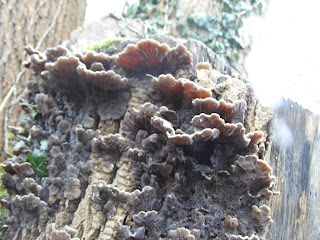 By now it was around 3 o'clock, so we headed down to Buckenham to see the corvid roost. As we drove down some nearby lanes there were already some flocks of Jackdaws gathering in the fields. Having parked up near the station and walked back along the lane, we waited for the corvids to fly in. Some large flocks flew around and covered the larger trees, but showed no sign of heading to roost. Eventually after sunset passed they rose up and flew towards Buckenham Carrs. I thought it was impressive, but fewer birds than I expected, until another birder told us to look past the church. Rising up from beyond the woods were thousands more corvids, rising up to form a blanket of black shapes. The calls merged together, sounding like rushing water. They finally began to land, coating the tree tops. A spectacular sight, and definitely worth the visit if you haven't been. This spectacle is also the focus of Mark Cocker's book Crow Country. 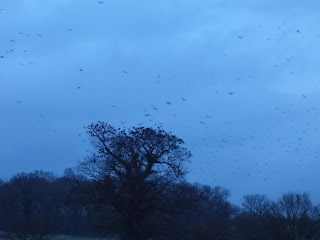 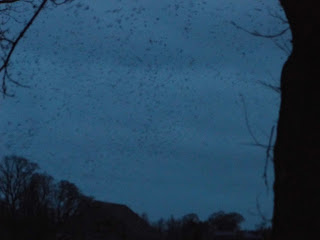