It was early afternoon by the time I got down to Whitlingham to carry out the January wildfowl counts. The shady areas were still covered in frost, but the sunshine had brought out lots of people who are still manfully keeping to their new year's resolutions. About a third of the Little Broad was frozen over, with a flock of 108 Black-headed Gulls loafing on the ice. After counting them I re-scanned to look for colour-ringed gulls. I found one, but it was quite distant. After a change of position and some squinting I worked out that it was White J5JE, a Norwegian bird that has been present for the past three winters.

Moving on to the Great Broad I had to decide which way to go. Usually I walk anti-clockwise, but if there is a lot of birds in the conservation area bay then I would go there first. A scan showed that the birds were scattered completely across the broad, so I stuck to my usual plan. There was no sign of the Pintail x Mallard hybrid, so my next port of call was the slipway, where after counting the area I once again checked the Black-headed Gulls for rings. As luck would have it I found two, only a couple of birds apart. One was White A341, a returning bird that was ringed in Germany, but the other one, White 926 (it looked like 9Z6 in the field, but looking at the photos the Z is actually a 2) hasn't been reported here before as far as I know. It appears to be from a Danish scheme, so I have reported it to them and await a response. 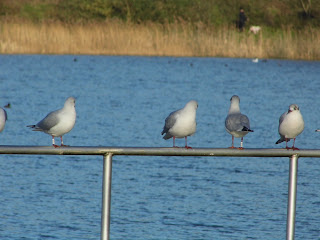 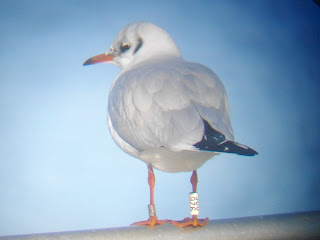 Heading along the south shore the next major counting point was opposite the main island. Here the main point of interest appeared to be the sleeping Shoveler, 20 in total. However to my delight whilst scanning the inlets around the island a female Pintail emerged. This bird was first seen last Sunday morning, but I hadn't seen it in the afternoon that day. It had been seen once during the week (albeit at Thorpe Broad), but has been very elusive. Indeed it proved to be, as I was unable to relocate it later on.

I looked across to Thorpe Broad, and was about to begin counting when some of the ducks flew up. I noticed that the reason for this was three people had walked out onto the central spit, one of whom then got out a fishing rod and began to fish. This would normally be very annoying, but as it was almost all of the ducks landed back on the broad a bit further out, so it was only a bit annoying. The pick of the birds was a Goldeneye, with a couple of Snipe steadfastedly refusing to move from the spit. The combined Whitlingham & Thorpe counts of Gadwall (213), Pochard (70) and Coot (205) were of note. In addition to the Pintail I added three birds to my patch year list, all heard only, which were Great-spotted Woodpecker, Redwing and Bullfinch, taking me up to 50 for the year.

As I was leaving there were some nice clouds over the meadows. I used to know what the formations were called, but that knowledge has long been replaced by some random scientific names for fungi. At home I set about entering the WeBS data, recording the overall species lists on BirdTrack, reporting the male/female Pochard split for the Duck Specialist Group Pochard Survey and reported the three ringed Black-headed Gulls to the ringers in Norway, Germany and Denmark respectively. Having done my bit for citizen science, I treated myself to a beer! 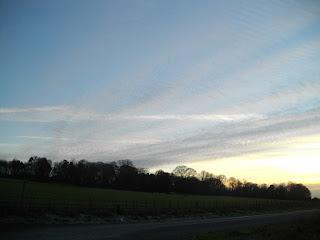