With the brief cold spell seemingly at an end, I made an early morning visit to Whitlingham. As I arrived the unseasonably mild weather was evident straight away. The overcast conditions meant less people than in previous weekends. I stopped briefly to watch three Grey Squirrels near the car park, before heading briskly for the bird screen. On the way I stopped to look at some fresh Yellow Brain fungus (Tremella sp, probably T. mesenterica) growing on a young tree. 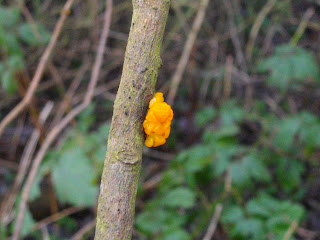 One of the things you notice early on in the day is that the ducks are spread out across the broad (as the day goes on disturbance causes more to move into the relatively undisturbed bay of the conservation area). This does make counts a bit more time consuming, and as I was going out for a meal at lunch I decided not to make any proper counts. The Shoveler showed nicely in the bay, but there was no sign of the Wigeon seen on Saturday by several birders. Canada Geese surrounded the island (I counted 20 in total), recently arrived birds as only three have been wintering here. I examined the underside of some bramble leaves to look for the spores of Violet Bramble Rust, and disturbed a tiny pale yellowy-green leafhopper. 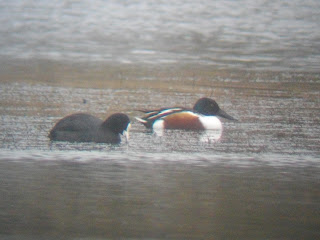 On my way to the east end of the broad I heard and then saw a Song Thrush high up in the willows - my first of the year here. In recent times there has been some disturbance across the river at Thorpe, with people feeling its appropriate to walk out onto the middle of the broad to fish. Luckily nobody was doing that today, but there was a man standing right in the middle of the scrape. The NWT reserves manager has been informed about these incursions, so perhaps some big signs or more fencing will be needed to keep some of the area as a refuge for the birds.

As I walked back along the south shore of the Great Broad I got good views of some Pochard that were feeding close in to the bank. A Cetti's Warbler gave a brief burst of song halfway along. There was no sign of any ringed Black-headed Gulls on the slipway, but the Pintail x Mallard did make an appearance. Brief views of Kingfisher and Green Woodpecker were a nice way to end my visit. 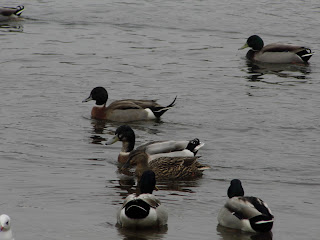