NORWICH: Looking for a Firecrest

One of the frustrating things about winter is that its dark after work, so if something interesting is found during the day, you have to hope that it is still present at the weekend. On Wednesday a Firecrest was found at Carrow Hill, quite close to my house. I didn't find out at the time, but then on Friday Justin went and saw that it was still there, so after work I power-walked to the ruined wall in the hope there would just be enough light to see it. There wasn't.

I headed back on Saturday morning for another look, but there was no sign of it. The trees here continue along the ridge, so hopefully it is still around, but a bit of luck will be needed to see it. The only new bird for the year was a Sparrowhawk that glided over, scattering the Feral Pigeons. I also noticed some evacuated leaf mines in Oxford Ragwort leaves, and the Alexanders was covered in Alexanders Rust, a fungus that is more prevalent at the coast. 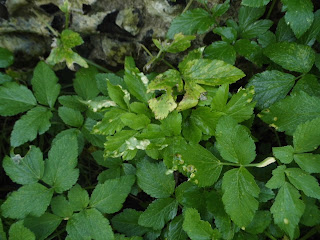 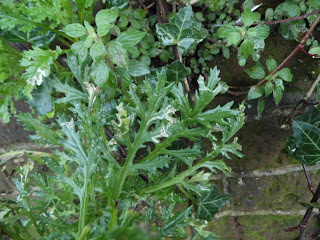