Despite Norfolk having a good spring vagrant wise, most birds have been one-evening wonders and I hadn't caught up with any of them. The appearance of another Broad-billed Sandpiper (as opposed to the re-appearance of the weekend bird - is what the cool kids on the ground are saying) seemed too good to pass up on, so having got Cathy's engagement ring we had lunch then set off for Breydon.

Jim arrived at the same time as us, so we walked along the south shore until we reached a couple of birders, who uttered the immortal "it flew off a minute ago" line so beloved of birders. We walked further along, scanning groups of Dunlin and Ringed Plover, until at the third group Jim and one of the birders we spoke to earlier simultaneously spotted the Broad-billed Sandpiper as it came over the ridge of the channel. We got good but brief views before having to move to allow cyclists past.

Typically the bird had disappeared back onto the water-side of the channel when several other birders joined us. Their hopes were briefly raised by a a mystery pale wader (could this be the leucistic Ringed Plover?) but having seen the well marked BB Sand we had to stick to our "it was here, and that isn't it" guns until it eventually did re-emerge. Even then it took a while to get everyone on it, every direction being related to groups of two or three Shelduck above and then between the Ringed Plover (there were loads of both). Whilst feeding it had a slightly long billed look (the legs did look a bit long too but maybe that was just posture), and a steady, methodical feeding action quite different from the nearby Dunlin.

I see today (Thurs) someone reported the Sandpiper to Birdguides as being on the Suffolk side of the river. Maybe only visible from the top of the Watsonian high ground eh? :-p 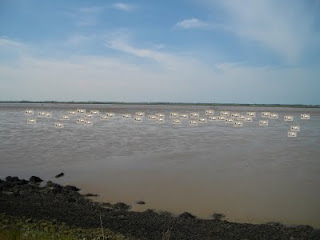 "See the three Shelduck? Well to the left are two Shelduck, and below them are..."

On the way back (and it was quite a long walk back!) Cathy found a Small Heath butterfly and a number of Common Blues, whilst I spotted a Hairy Dragonfly and a rufescens-type immature Blue-tailed Damselfly.

Oh, and one other thing from the past few days. I didn't bother getting involved in the flyover Black Stork debate a while back when one was photographed and put on Surfbirds, but I see that news of one on the east coast one morning recently was put out. I have no issues if people choose to put out the birds they find or not (although obviously I'm grateful to those who do), but people are generally quick to criticise, so I just want to say "nice one" to whoever put this one out, I and I'm sure many other people, appreciate it.
Posted by James Emerson