With rain forecast for the weekend, Neil & I decided to go and have a look at the long-staying Red-footed Falcon at Horsey after work. The slight flaw in our plan - the rain had started already. Nevertheless we set out along the Nelson's Head track, and as we approached the dunes we saw Julian Bhalerao and another birder, who told us that the falcon was currently sheltering in a bush close to the path. It was well tucked-in, and slightly poetic that my first view of a Red-footed Falcon was off a pair of red feet. Incidentally these are magic feet. Check out the redness of those, compared to the orangey yellow of the feet on some photos of this bird, e.g. Gary's: http://www.birdforum.net/attachment.php?attachmentid=331286&d=1308254741 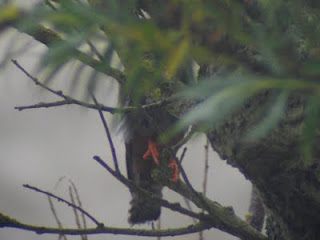 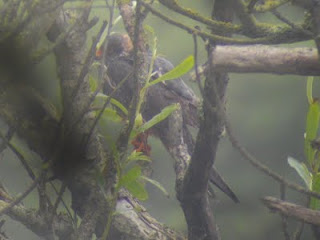 Moving round to view the tree from the other side we could see a bit more of the bird, and were able to watch it at a range that I could only have hoped for. I had always imagined that it would be best to see an adult male, but this 1st-summer male changed my mind. I rather like the orangey bit on the back of the head, it gives character. Rather soggy, we walked back along the track, very glad we'd braved the weather. On the way back to the car we saw a singing Yellowhammer and a brood of newly fledged Whitethroats. Between Sea Palling and Ingham I saw a Little Owl sitting on a gatepost, but it flew off before I could get any photos.