25th June 2011
Although my main interest has always been birds, I have long been interested in the gaudier insects as well. Whilst there are loads of moths, Norfolk has a list of 34 resident butterflies, which should be easily achievable. Last year I saw Chalkhill Blue (albeit the colony is introduced), which was my 31st. Earlier this year I saw Dingy and Grizzled Skipper, leaving me with just White-letter Hairstreak. A number of people had suggested sites to me (thanks guys!) but in the end I took the Butterfly Conservation website advice and headed to Holkham.
We arrived to unpromising dark clouds. Margaret assured us that it was meant to get brighter soon, an irony not lost as a Barn Owl flew out of the pines and out over the marshes. Eventually it did lighten up, and with the light came the butterflies. Loads of Meadow Browns, and a few Ringlets, including a newly emerged one with crinkly wings. A couple of White Admirals, probably my favourite butterfly, flew past but never looked like settling. Arriving at the favoured stand of Elm I spotted two hairstreaks flying near the top, but then found one lower down on the privet. Despite the overcast weather I managed to get a record shot of a White-letter Hairstreak, Norfolk butterfly number 34. Get in! 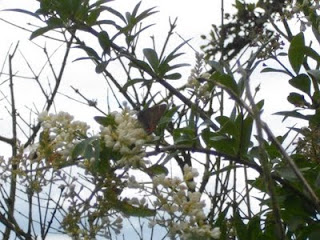 Hoping to see some Dark Green Fritillaries we carried on, but soon came across something even better as Margaret found a Broad-bordered Bee Hawk Moth on some everlasting sweet pea. As Cathy watched it fly off I found another slightly further along, and we both got some photos of this enchanting mimic. The sun had gone in again so I didnt spend long looking for fritillaries, but we did see a resting Hummingbird Hawkmoth, a Common Lizard, lots of small Toads and several Earthstars of unknown species - Holkham has records of nine different earthstars, but the likelihood is that these were the commonest one, Geastrum triplex). After a successful trip, we went home via Wells for chips. 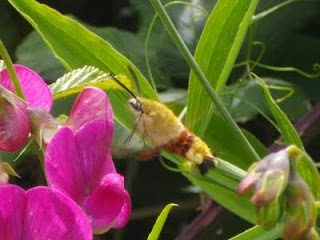 Incidentally despite having now seen the main Norfolk butterflies I have yet to see any immigrant species (although I have seen Clouded Yellow and Silver-washed Fritillary in other counties), so I'm still keeping my eyes peeled!
Posted by James Emerson