Exciting times this afternoon, as I found a new hybrid goose at Whitlingham! Superficially resembling a Barnacle Goose in size, beak shape and head pattern, the back was dark and there was a brown tinge to the back of the white on the face. It was with a large flock of Canada Geese and a Canada x Greylag hybrid (also pictured). If anyone wants to comment on parentage, or has seen this goose elsewhere in Norfolk or North Suffolk then I would be pleased to hear from you. 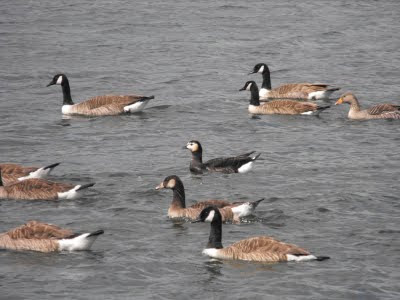 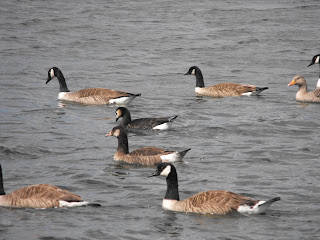 Other than this goose there wasn't much to write home about. No sign of the Spotfly, but there was a singing Garden Warbler near the Little Broad carpark. A Norfolk Hawker and several Black-tailed Skimmers were flying along the south shore, whilst a Cinnabar Moth and a Large Skipper were found amongst the vegetation. Rather than walk around the back of the broad I went up to the end of the Lime Tree Avenue to search for partridges. Whilst here I saw some Meadow Browns, then absent mindedly looked at the skyline above the meadows. Ah. Up until last week I had never seen a Peregrine at Whitlingham, and yet all this time there was a vantage point where I could have set up my 'scope, brought some sandwiches and just waited to see one flying up to the cathedral. No wonder I never see anything, I'm not paying attention! 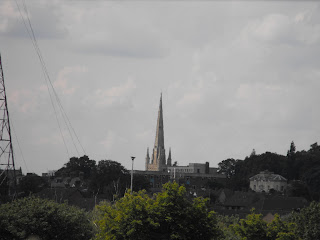 Who put that there?
Posted by James Emerson