Friday 27th - After work we went for a quick tour of some more local villages, the best find being eight Yellowhammers singing around the village of Carelton Rode.

Saturday 28th - Today was allocated to looking at the brewer's market and going to the pub, but before meeting some friends we went to the Cathedral to check on the Peregrines. We didn't see them - the female was off hunting and the male was sitting on the egg, but we picked up the following information from Nigel Middleton's wife (sorry I can't remember her name!):
1) If the egg doesn't hatch in the next few days (i.e. by the time I'm typing this) then its unlikely to hatch at all.
2) Up to four Peregrines have been seen around the Cathedral in recent days.
3) The breeding female has lost several feathers from its tail, making it quite distinctive at the moment.

Sunday 29th - Part three of our trawl around local villages, we stopped at Bawburgh so I could look/laugh at a Muscovy, when a Kingfisher peeyood downriver. 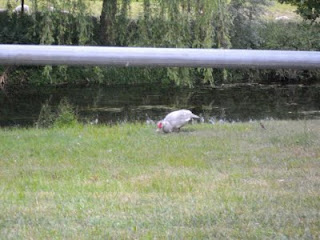 Monday 30th - A small emergence of Large Skipper butterflies in Cathy's garden, along with a Cinnabar moth. A Treble Brown Spot Moth was also disturbed from the hedge. 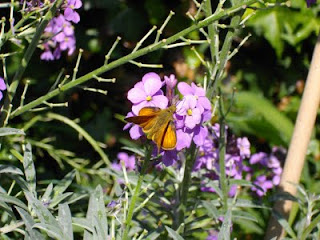