I spent a sunny morning wandering slowly around the Great Broad, checking each blue damselfly looking for azures or variables, but every single one was a Common Blue. I heard a Cuckoo calling from south of the picnic meadow, but a quick investigation found that it was out of sight range. Further round I heard another, this time coming from the the trees near the NE of the Great Broad where I had heard one earlier in the year. This time I wasn't the wrong side of the river, and soon located the Cuckoo sitting up in a large willow before being mobbed around the plantation. Checking the ruins of Trowse Newton Hall and the surrounding trees I found the hoped for Spotted Flycatcher, which endulged me with some flycatching before flying down to the ruins for a root around. On my way back I caught sight of a Peregrine flying from the city over the waste ground. A quick backtrack allowed me to watch it fly over the river and firmly onto the patch! 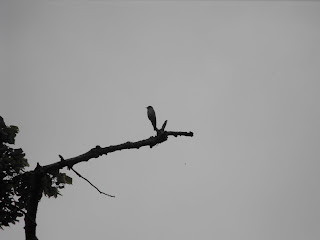 In terms of insects, hundreds if not thousands of Common Blue Damselflies and a lovely violescens-type immature Blue-tailed Damsefly, plus 2 Banded Demoiselles. Also Mullein Moth caterpillars on the mullein near the woods.