WHITLINGHAM: At last, a Goldcrest

19th June 2011
Aware that I had had a bit of a twitchy week, I made sure I ignored the drizzle and went for a stomp around the patch. A couple of Common Terns were fishing along the far edge of the Great Broad, only the second time I've seen them here this year. With the rain getting a bit steadier I went into the woods and decided to spend some time hunting out Goldcrests, a resident species that I havent seen since the harsh spell of weather in the winter of 2009/10. After staring into the canopy for a while (probably the "type" of birding I enjoy least) and being decieved by the high-pitched calls of young Coal Tits, I did eventually find a couple of Goldcrests. Huzzah.
At Whitlingham Marsh the old bird hide has been replaced by a reed screen. This isn't a big problem, there was usually very little to see anyway, although I'm not sure some sections of the public will find it as good for business. Nothing of interest at the sewage works either, and a paltry 7 spikes of Pyramidal Orchids in the meadows opposite the woods. A search of the scrub between the Little Broad carparks and the broad yielded Marsh Tit, female Blackcap and some young Chiffchaffs. Butterfly wise I saw another 2 Ringlets, and an unidentified orange butterfly sp. flew frustrating past and vanished behind a tree.

[Edit] Also, so bizarre that I blanked it from my mind, for some reason there was a Bantam scratching about in the undergrowth near the main carpark. What's that about? Sculthorpe get Golden Pheasants, we get a Bantam. Ridiculous. 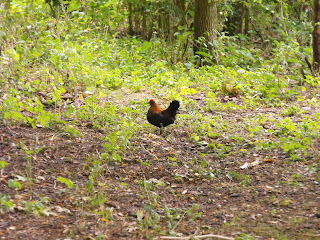