A drizzly day, and with no-one wanting to go very far I went out to spend an hour at Thorpe Marshes. When I arrived I found a shiny new sign announcing "NWT Thorpe Marshes". Too late now, but calling it "NWT Thorpe Station Marshes" would avoid the constant confusion with sighitngs from Thorpe Marshes near Haddiscoe. I thought they had built a radical new hide as well, but on closer inspection it turned out to be the wooden cabin of a boat built in the childrens play area across the river. I had been told that the NWT were helping with the management of the site, but I wasn't sure whether it would eventually become one of their reserves. I guess its a good thing, although several locals I spoke to a while back were concerned about a reduction in access. I will look out for any information regarding the wildlife trusts involvement and report back here. 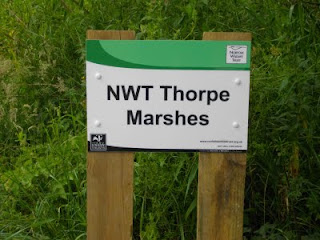 Birdwise the broad was quiet with no waders at all, although there were dogwalkers on the edge of the broad - blocking the open shingle that leads from the path to the waters edge should be a priority as people just use this now that the main route is gated. Swifts and hirundines hawked low because of the weather, but there was no sign of the long-anticipated Hobby. I was reduced to looking through the waterside vegetation, eventually finding a Brown China-mark moth. Various warblers were still singing, but that was pretty much it.
Posted by James Emerson