With autumn approaching and the nights already pulling in, I took the opportunity to take a late-afternoon stroll at Thorpe Marshes. I was optomistically hoping that an Osprey or wader sp. would fly over whilst I was there, but had no luck on either front. In fact birdwise 3 Tufted Ducks and a couple of House Martins were as good as it got.

I amused myself by checking the umbellifers for insects. Most of the Hogweed has gone to seed now, but in wet areas it has been replaced by Wild Angelica, which is also good for insects. There were lots of wasps, but also several species of hoverfly. Eristalis intricarius and Volucella inanis are both species that I have seen at Whitlingham, but these may be the first Thorpe Marsh records depending on if anyone else locally records hoverflies here reguarly. I saw at least one new hoverfly species, but frustratingly it can only be determined to a species pair (some people believe they are just one species). This was the thin and pointy Melangyna compositarum or labiatarum. I also got good pictures of an adult Parent Bug (I saw late instars of this species recently at Whitlingham) and a very patient Migrant Hawker. 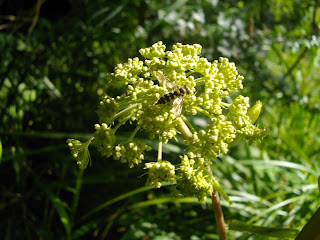 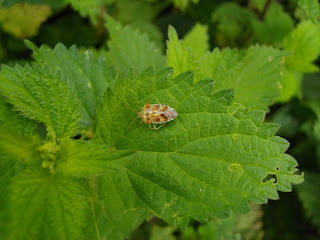 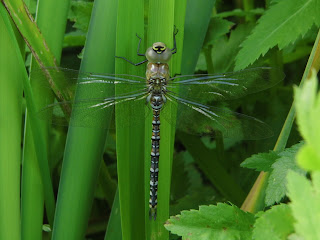 Having checked my photos and lists from recent trips I have been able to add another three species. Firstly I had failed to add Toad (one seen in Trowse Woods last year), and much more recently I realised that the large leaves along the riverbank belonged to Butterbur, and the mildew on Field Maple is as you would expect, Maple Mildew.

I added three species on this particular visit. Tansy I suspect I have seen before here, but it wasn't on the list. The beetle Coccidula rufa is a member of the ladybird family, half of which don't actually look like ladybirds. Thanks to Mark for mentioning that it was present at Thorpe. Finally a common spider that also wasn't on my list, Four-spotted Orb-weaver. This takes me to 949, 51 to go until I get to 1000! 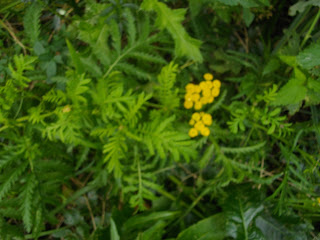 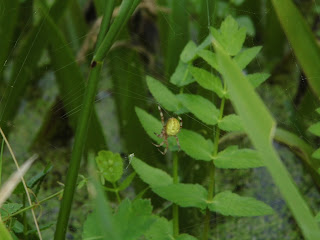