The first fungus foray of the autumn for the Norfolk Fungus Study Group was held at Calthorpe Broad, a national nature reserve that is usually off-limits to the public. Parking was limited, so we convened at Hickling and transferred into two cars for the final bit of the journey. As we walked along the track to the nature reserve we noticed lots of Marsh Cudweed and several Sericomyia silentis hoverflies, which seem to be doing well at the moment.

We had been warned that the site can be very wet, but in part due to the recent dry weather it wasn't too bad at all. We started in a wooded area, and soon found a couple of Russulas and some Tawny Grisettes. Burnt areas have their own fungal flora, and one here had lots of cup fungi growing on it, including Charcoal Cup (Peziza echinospora). Nearby was an unusual looking rush, which I identified at home as the viviparous form of Bulbous Rush. We also noted a couple of Sausage Ground Beetles near some decaying wood. 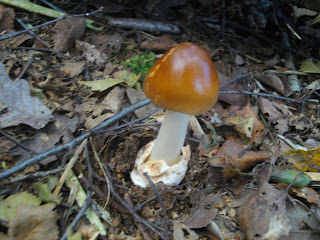 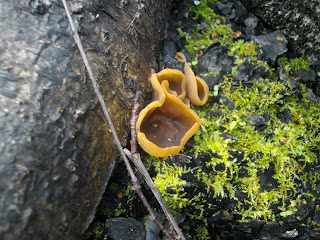 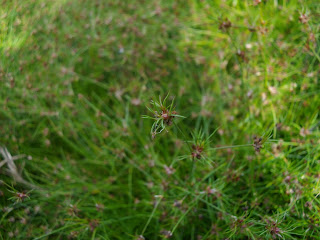 Taking another path we headed through a birch clearing, which didn't have much fungi but did hold several Common Groundhoppers. Several people waded into a ditch to look for some of the specialist species that grow on reed stems, and the small Mycena bulbosa was found growing on Purple Small-reed. There was large stands of Royal Fern and a few insects were found nearby, including my first Golden-haired Robberfly. 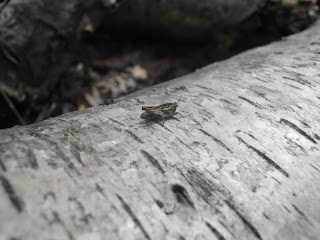 We stopped for lunch before heading further onto the reserve. In an area of Alder carr we saw my first Cinnamon Bracket and some small Milkcaps growing under Alder. A Kingfisher flew past us and lots of Ruddy Darters were seen. It began to rain lightly, and several of us had other plans for the afternoon, so we split in two, with several members staying to foray further and the rest of us heading back. It was interesting to get a look at this site, and hopefully once the determinations are done it will turn out that there were a few more new species from the visit. 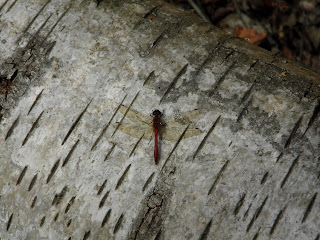