Whilst I had been at Hickling looking at fungi there had been a very good passage of seabirds, so on Sunday morning I got up early and went to the coast hopeing to catch the tail end of it. As is often the case Sunday didn't match up to the previous day, with Arctic Skua, Great Skua and lots of Red-throated Divers the highlights. Eventually I gave up and headed home for lunch, before then heading to Whitlingham to carry out the WeBS count.

There wasn't anything particularly unusual for the time of year, although both Mute Swan and Greylag numbers are well down on last year. Coot numbers jumped from 47 in August (similar to 2015 when 44) to 97. Last years October count was 103, so it will be interesting to see if this is just an early arrival or whether numbers will be higher this winter. Two Buzzards were seen over the thin strip of woodland between the lime tree avenue and the ski slope.

Despite keeping my head down and concentrating on birds I did add three patch species, Marsh Cudweed (which seems to be having a good year, I've seen lots of it elsewhere), the hoverfly Rhingia campestris and a powdery mildew on Water Mint. Parent Bug and 22-spot Ladybirds were also noted. Once again several people thought my telescope was a camera - this happens on every count and I'm becoming very weary - if you don't know the difference between them please google it and pass on the knowledge. 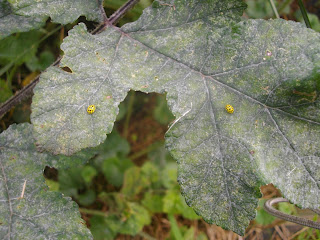 22-spot ladybirds (they feed on mildew) 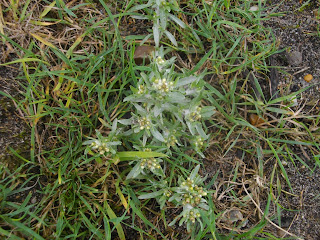 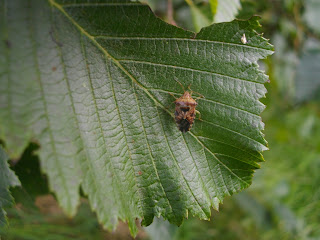