This morning the South Yare Wildlife Group held a fungus foray at Whitlingham Country Park. It was well attended, with a mixture of members and non-members of all ages. Anne Crotty, Neil Mahler & I were present to attempt to put names to the finds, and despite the recent dry weather we did find a range of specimens. This is an account of the walk - we took a few specimens away to look at microscopically so I shall post the full list for any participants to download once we have looked at those.

Having congregated in the car park we set off along Whitlingham Lane, stopping to look at our first fungus of the day, a Common Earthball (Scleroderma citrinum). A little bit further along some very blackened remains of a small bracket fungus were visible on a nearby log, almost certainly old specimens of Yellowing Curtain Crust (Stereum subtomentosum). 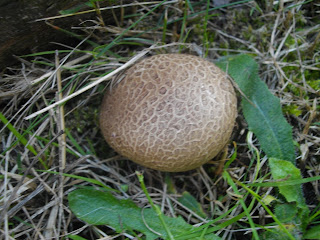 We turned right onto the picnic meadow and followed the path around the edge. Neil saw the remains of an old Dryad's Saddle bracket (Polyporus squamosus), but deemed it not worth looking at. This is a common species at Whitlingham, although as it happened we didn't see another one on our walk round. Near a locked gate Anne spotted a Copper Spike fungus (Chroogomphus rutilus), a distinctive species associated with pine that neither of us had seen here before. 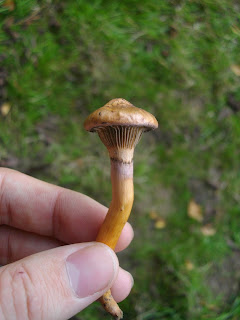 We found quite a few specimens as we went round, much of the either Yellow Fieldcaps (Bolbitius titubans) at various stages, or Turf Mottlegills (Panaeolus fimicola). There were several other species that couldn't be identified in the field, including a Brittlestem (Psathyrella sp.), whilst a small grey-capped species nearby was probably Willow Shield (Pluteus salicilis), a species that grows with Willow but might have been associated with wood brought in from elsewhere for den building. Some earthballs covered in a pinky-orange mould were also of interest. 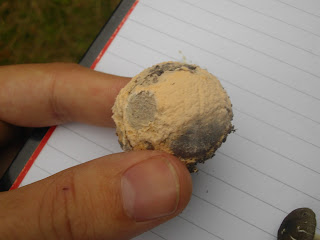 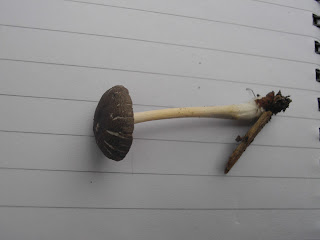 Heading into the woodland edge we soon came across a Beech stump surrounded by fungi. The large brackets surrounding the base and on the top of the stump were Giant Polypore (Meripilus giganteus), whilst Turkeytail (Trametes versicolor) was growing on top, and Lumpy Bracket (Trametes gibbosa) was growing from the top and partway down. A fourth species, an easily overlooked black fungus called Brittle Cinder (Kretzschmaria deusta) was also growing on the stump. 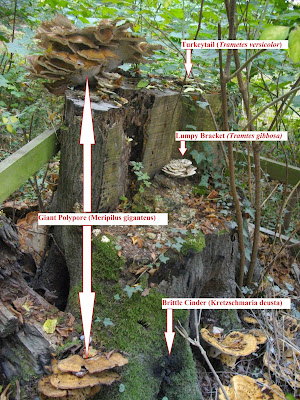 Other species from this section of the walk included several Boletes, probably from the genus Xerocomus or Xerocomellus, that we couldn't identify to species. Dead Moll's Fingers (Xylaria longipes) and Dead Man's Fingers (Xylaria hypoxylon) were both seen, along with Small Stagshorn (Calocera cornea) and Oyster Mushroom (Pleurotus ostreatus). Several slime moulds were present, including Wolf's Milk (Lycogala terrestre) and Flowers of Tan (Fuligo septica). High up on a Beech tree some Ganoderma brackets were growing. 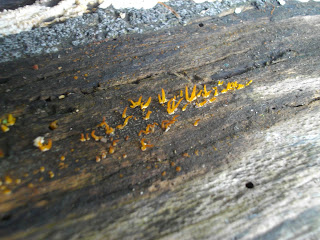 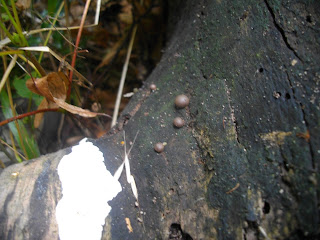 Emerging from the woodland we looked out over the Great Broad, and whilst looking at the blue-green algae along the water edge Dan pointed out some Nuttall's Waterweed, a new species for me here. Under some Alders there was some large fungi that at first look appeared to be Brown Roll Rims. This species is however associated with birch, so it is likely that this is the closely related and fairly recently described Alder Roll Rim (Paxillus rubicundulus). This is a species I've never recorded before, so I hope to check the spore size and confirm this one. 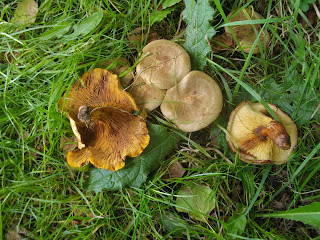 We made one last detour, to a woodchip pile nearby where some Wrinkled Fieldcaps (Agrocybe rivulosa) were growing. This is a recent colonist to the UK, having only been recorded here since 2004, but it is now fairly widespread. We then headed back to the visitors centre for a cup of tea and to sort out who was going to look at a few of the trickier species we found. There was a bonus on the way back to the car when I spotted some Yellow Sorrel growing in the car park. There are several similar species so I'll need to go back and have another look to confirm which one it is, but I've not seen any of them here before. 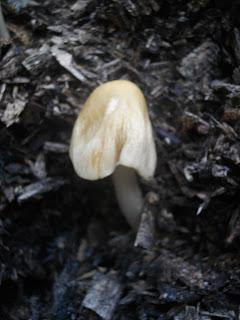 Thanks to Dan for arranging the walk, and to everyone who came. If you are interested in a complete list of our finds then please check back here later in the week, when we will have compiled the final list.
Posted by James Emerson