Near the start of the year I put together a list of target species for 2016, and I wanted to include a grasshopper or bush-cricket. Having seen all of the regular Norfolk species I opted for one of the Suffolk ones, Woodland Grasshopper or Grey Bush-cricket as the next closest ones to look for. When discussing my list with James Lowen, he mentioned that in August he planned to go down to Dungeness to see colonies of Sickle-bearing Bush-crickets and Tree Crickets, both recent arrivals in the UK, and I would be welcome to join him. The chance to see these interesting species and visit Dungeness, a site I'd not been to before, were both good reasons for going, but there was a third reason - a trip there had been heartily recommended to me by popular 2000s guitar band Athlete*

Fast-forward seven months or so and the crickets had emerged, so it was then a case of finding an evening that James, Will Soar and myself could all go to Dungeness. We finally found one, and James used his extensive contacts to ensure that the warden of the bird observatory would be around to show us where to look. The three of us, along with UEA's Phil Saunders, headed down into Kent and arrived at Dungeness with a couple of hours until sunset. My initial impressions were akin to arriving on a wild-west film set, with the vast plain of partially vegetated shingle sparsely decorated with slightly ramshackle houses and a narrow-gauge railway line. The power station and thin lighthouses dominated the skyline.

When we arrived at Dungeness Bird Observatory we met Dave, the warden, and enquired about some moths that had been left in the fridge from the previous evening for us by Marcus, another friend of James's. The best of these was a Rest Harrow, but the micros were also scarce, including Evergestis limbata. It soon became apparent that a lot of the wildlife here was either rare or at least significantly different to Norfolk. We inspected the area that the moth traps had been near, and most of the moths were either new or of interest, including a couple of new grass veneers, Grass Emerald, Mullein Wave and Toadflax Pug. 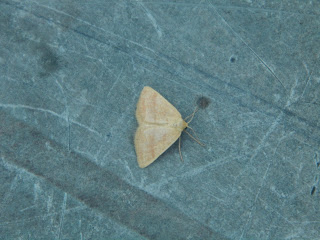 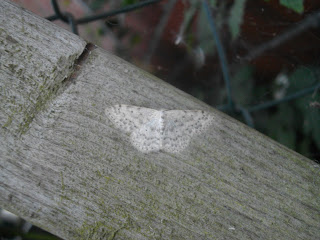 There was a risk that we could have stayed around the observatory for ages, so Dave hurried us along so that we could see the crickets in daylight. On our way out we stopped to scan the post line, which was occupied by lots of Wheatears. Having been taken to the relatively small area occupied by the crickets we soon began to find our quarry. We found several bright green Sickle-bearing Bush-crickets, and lots of Tree Crickets, including a mating pair. There were also two more bonus species, Lesser Cockroach (my first native species of Cockroach) and also a Grey Bush-cricket, which briefly hopped on to an old bit of tin. 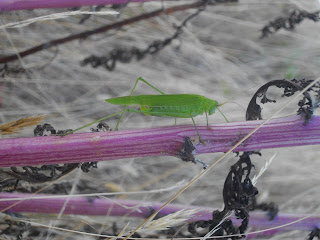 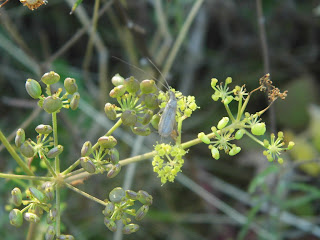 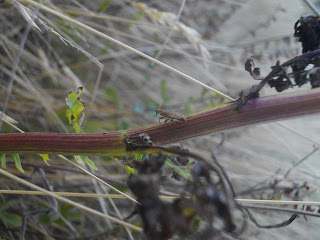 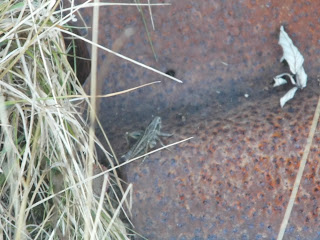 One of the most interesting things about them, and the way the Tree Crickets were first found, is by the noise they make at night. We decided to head across the reserve to the pub, stopping occasionally to look at other stuff, like the parasitic plant Dodder growing on Broom. At the Pilot we ordered fish and chips and a pint whilst darkness fell. A bonus bird here was a Curlew Sandpiper that flew over calling. 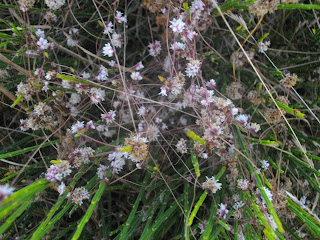 Torches out we returned to the wilderness between the pub and the obs, and as we approached we began to hear the Tree Crickets. It is a difficult noise to describe, but sounds a bit like an electronic bleeping car alarm. In chorus I thought there was a dash of Nightjar churr to it too. I didn't manage to get any video of it (the microphone on my camera didn't pick it up), but if you have five minute I heartily recommend this clip from the One Show, where George McGavin went to Dungeness to see the Tree Crickets.

The stridulating Tree Crickets were much harder to find than they had been during the day, but eventually we did see a few. We returned to the observatory, but on the way stopped at a row of wooden posts where we searched successfully for a scarce metallic blue beetle (Helops caeruleus) that lives here. 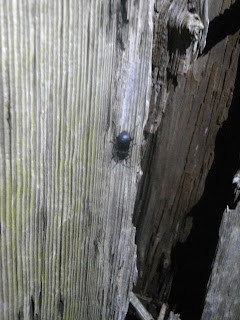 The moth traps had been left on for us, and there was a bit of exceitement when I noticed a shiny macro with a white streak down it. We caught it, but it turned out to be a Gold Spot, with one side 'normal' and one with a streak instead of spots. Not too many moths had arrived, but there were still some new ones for me, including Galium Carpet and Frosted Orange (I have no idea why I haven't seen the latter in Norfolk yet). There was another orthopteran bonus for us too, in the form of a Southern Oak Bush Cricket, which got away before being photographed. Aware that we should probably let Dave get some sleep, we returned to Norwich, getting back just after 2am. 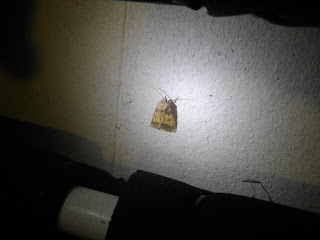 Many thanks of course to James Lowen for organising the trip and to Dave Walker for his hospitality at Dungeness Bird Observatory. My photos don't really do the insects justice, so if you are interested I recommend you check out James's blog for some better ones here.

* In my uni days (and for a number of years afterwards) I was a bit of an indie scenester, attending lots of gigs and getting there early to see the support bands. One of my first gigs was Electric Soft Parade at the Waterfront, and Athlete were a support band, who had just released their first EP. They went down well with the crowd, playing a number of songs with rather similar melodies but different, catchy choruses. One of these songs was called "Dungeness", and the chorus, repeated over and over again was "Let's go-to-Dun-ge-nessss" I've remembered it ever since.
Posted by James Emerson