On Sunday morning I noticed on Twitter that Nick Watmough had found a Wheatear at UEA. Having not seen one in the Norwich area I decided to go and have a look, and headed down after lunch. There had been no reports either way since it was first seen, around 8, so I wasn't particularly optimistic as the area is popular with walkers. I had drawn level with Suffolk Terrace when I spotted Drew watching something close by. Looking past him I saw the Wheatear on a small grassy mound. It was quite active, running along the ground then flying up onto the building. 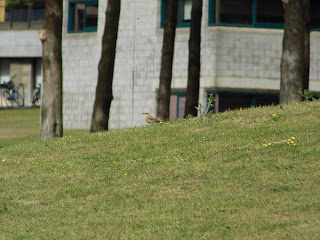 Having got some good views (and not wanting to be staring through peoples' windows with binoculars!) I left the Wheatear and decided to walk back around the broad. I spent a bit of time looking for insects on Ragwort, and spotted a Roesel's Bush-cricket. At the end of the broad I checked for terrapins, and noticed that the yellow water-lilies were actually Fringed Water-lily, which clearly I had seen here before but not recorded. Further round there was a fallen willow with lots of Chicken-of-the-woods growing on it. Before leaving I checked the horse paddocks near Bluebell Road, but there weren't any migrant about. 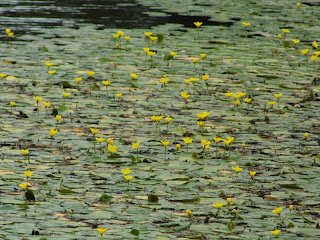 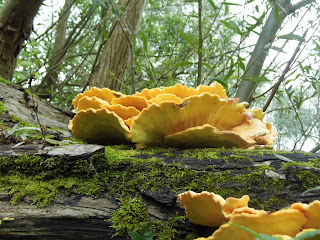