For the first of a weekend of fungus forays I headed to Sustead Common, where Tony Leech was leading a walk for the Felbeck Trust. He cautioned that the recent spell of dry weather meant that fungus numbers were currently lower than they had been earlier in the month, and he was proved right, with 37 species recorded. However, several of these were a bit unusual, so slightly oddly it was some of the commoner species that omitted.

Whilst the group assembled I went over to a Hawthorn hedge and found Hawthorn Twiglet (a small species that grows on buried Hawthorn berries), Scaly Earthball and Brown Cup. I then spotted some more fungi in an area of flat ground in the middle of the wildflower area, so we all went over for a look. There were two species here, and neither were field identifiable. Tony took samples home and identified them as Entoloma undatum and Rhodocybe popinalis, both species I've not seen before. 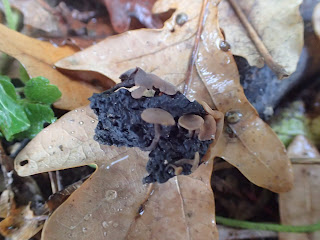 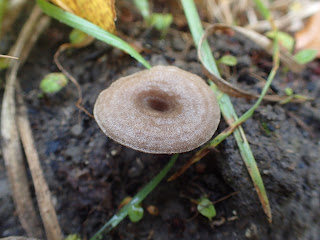 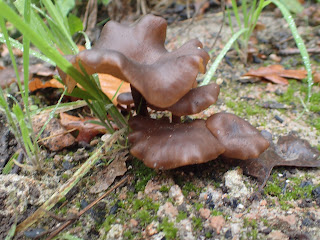 We continued across the common, seeing Red-edged Brittlestem and Frosty Bonnet. On the edge of a culvert I noticed a small Helvella, which I assumed was just a small specimen of White Saddle. As is so often the case however there are many similar species, and it turned out this was the 3rd Norfolk record of Helvella latispora. 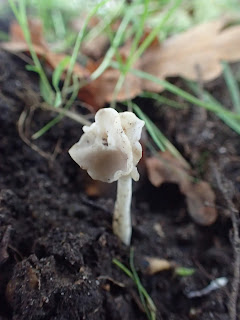 After a few more stops to see Cushion Bracket, Smokey Bracket and Burnt Knight, we headed out along the road and crossed over into Spurrell's Wood. This area is now also managed by the Felbeck Trust, although it doesn't currently have any public access so I was visiting it for the first time. The area is mostly relatively young woodland, and as there was a lot of Hazel it didn't take us long to find Fiery Milkcap, a symbiotic species. 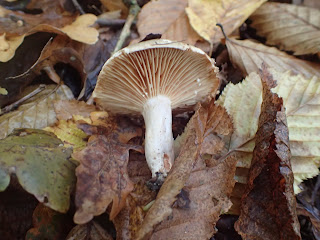 The lack of old and standing wood restricted the species list a bit here, but we continued to add a few more species, with Fragile Brittlegill and Pearly Webcap were both of note. A Tawny Owl called nearby, whilst we also saw Siskins, Redwing and a small V of Pink-footed Geese, all sure signs of autumn. Thanks to Tony and the Felbeck Trust for organising the foray - I look forward to seeing how the site develops in the next few years.
Posted by James Emerson