Sunday was WeBS day, so I was off to Whitlingham for some bird counting. That proved harder than it could have been at the Little Broad, with the vegetation having grown up to the extent that the corner near the path to the large car park is the only reasonable viewpoint at the moment. A Water Rail squealed unseen from the reeds as I scanned the far end.

Moving on to the Great Broad there wasn't much of note, a begging juvenile Great-crested Grebe, the Pintail x Mallard hybrid and 2 Little Grebes were the pick of the bunch. Of the rest the Greylag Goose numbers are well up on the previous year but we are yet to see Coot numbers build up.

Over at Thorpe again the vegetation hampered visibility - small numbers of Tufted Ducks, Gadwall and Teal were seen but the Shoveler that have been reported recently weren't visible.

Sunday was also UK Fungus Day, so it was fitting that I saw a couple of interesting species. The first was Blushing Wood Mushroom, which was growing on some woodchips. Much rarer was Allopsalliota geesterani. This interesting fungus is a shaggy, robust species that bruises bright yellow to start with before turning red. It was seen at Whitlingham in 2009 and that was only the second UK location following a site in Yorkshire. It had not been seen again at Whitlingham since, so this was a pleasing rediscovery, particularly as I had been frustrated knowing something so rare was around somewhere! 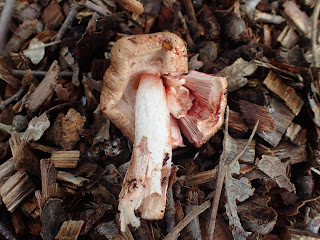 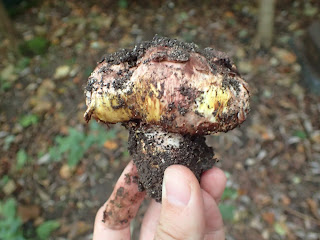 I also saw three new agromyzid leaf mines, including one of the schemes October target species, Aulagromyza luteoscutellata, in Snowberry. 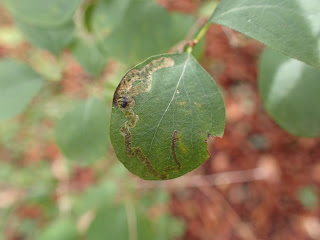