On Sunday I joined Rodger to lead a fungi walk around Strumpshaw Fen. Although there is a relatively small number of people recording fungi, they seem to be growing in popularity generally - the walk was fully booked with an extensive waiting list.

After a brief introductory talk and handing out of a worksheet I'd put together, we headed off into the woods. The first stop was the marquee clearing, where a good range of species were growing on or near the log circle. Species here included Honey Fungus, Glistening Ink Caps, several bracket fungi, some Peeling Oysterlings and an interesting-looking yellowy-green species. I didn't recognise it, so I took one of them home to check and it turned out to be Mousepee Pinkgill (the name is down to the smell!), a new species for me. 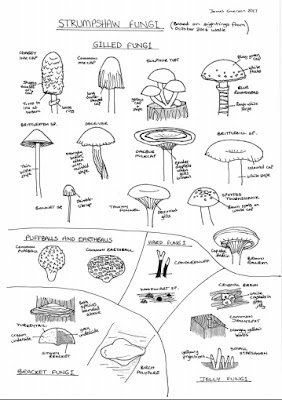 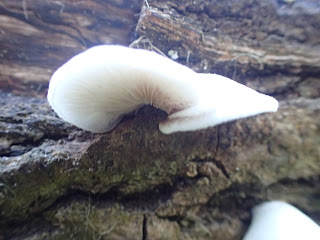 Walking along to the next clearing we stopped to admire a young Frosty Webcap. After looking at the different stages of Sulphur Tuft, another interesting sighting nearby was some bonnets growing on a rotten log. These looked like Common Bonnet, but I was puzzled by the red markings on some of them. There is a scarce species that has red marks, but having contacted Tony Leech he was able to point me in the right direction, notably that the red is caused by a secondary fungus (Fusarium sp). Some of them were also covered in Bonnet Mould, so three fungi were present on one fruiting body. 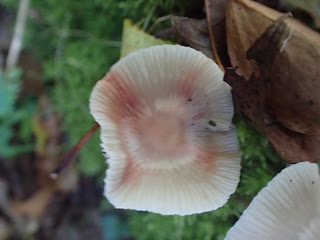 Last year there were earthballs and Amethyst Deceivers along a dyke, but this year there was no sign of either. We did continue to see a good range of species though, including Common Puffballs, Bluefoot Bolete and Stinkhorns. Several types of Milkcap were seen, including Coconut Milkcap. As well as all the fungi we saw several types of slime mould, although some small red balls that I thought were another slime mould turned out to be a second new species of the day for me, Nectria coccinea. 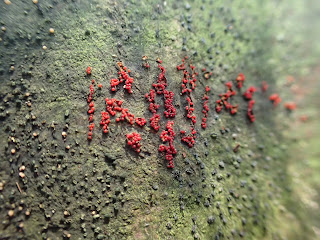 Our walk through the woods had to be paused when one of the participants hurt her ankle, but once help was on the way the rest of the group explored one more clearing, adding Skullcap Dapperling, Lumpy Bracket, Birch Polypore, Common Earthball, Jelly Ear and Purple Jellydisc to the list. 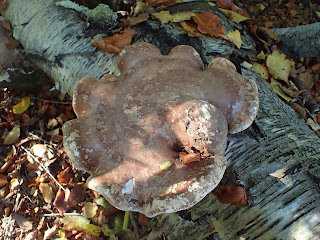 Thanks to everyone who came along - if you were there and would like a copy of the species list then get in touch via the comments or email.