Norwich is a pretty good city for wildlife, and as such I often see new or interesting species whilst walking to and from work, or whilst in the city centre. On Monday morning I thought I had filled my quota of unexpected sightings for the day when a Muntjac Deer ran across Lakenham Way in front of me, but as it was there was something else to see.

Late afternoon I received an email from Gary, complete with a photo of an L-album Wainscot moth. This was a bit of a surprise, as there have been very few records from Norfolk. The species now has a breeding population in Suffolk, but the two pre-2017 Norfolk records were thought to be immigrants from the continent. The larval foodplant is Marram grass, which is in short supply in Norwich.

Looking more carefully at the photo I thought that it didn't look like the decor in Gary's house, which was confirmed when he told me that the moth was in the womens toilets at his workplace in the city centre. This begged an obvious question, however there turned out to be a mundane explanation - Alysia had found the moth, then been sent back into the toilets to get a photo, then (after a gap so as not to make colleagues think she was ill!) finally to catch the moth. Gary very kindly brought it round on his way home so that I could have a look. This turned out to be the 6th Watsonian Norfolk record (7th administrative), and interestingly another one was found in Norwich the day after. 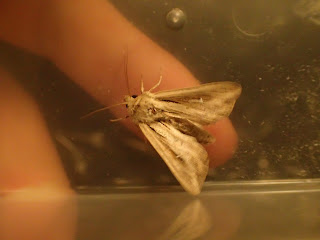 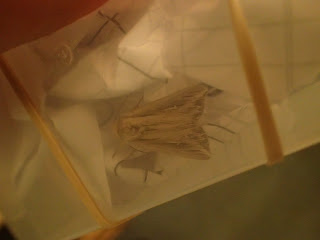