An addendum to the last post really. One of the important parts about any wildlife watching or recording is that the more familiar you get with common species, the more likely you are to spot something different. One of the relatively common fungi in good-quality grassland habitats is Meadow Coral, a species that varies in colour from yellow to a sort of yellowy-orange, and also in how branched it is. Below are a couple of photos of Meadow Coral, from Earlham Cemetery and Felbrigg. 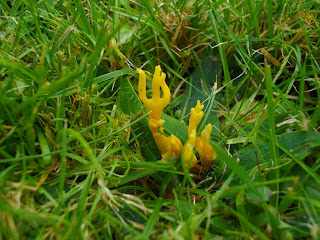 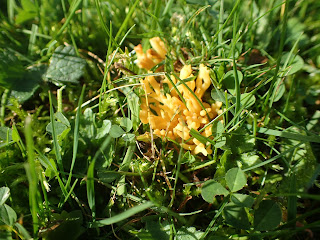 Fortunately for me, Ian Senior sees a lot of it, so when he found a clump of coral fungus that looked more orange than Meadow Coral he gave a piece to Tony Leech, the county fungus recorder, to double check it. Ian was proved right, and this orangier coral was identified as the aptly named Orange Coral, Clavulinopsis crocea, new for Norfolk. Having been given directions I managed to see it after the foray last weekend, thanks again Ian. 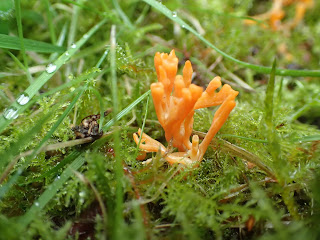