On Sunday the monthly walk at Earlham Cemetery was focussing on fungi, but I had to delay my arrival to see the end of the Norwich vs Ipswich derby match on TV. Fortunately Norwich won, so I was in a good mood when I arrived at the cemetery and caught up with the group. There was a bit of rain in the air, which meant a relatively small group.

There was noticeably less fungi about than usual at this time of year, but one of the ones we did found was quite unusual, in that it was covered in white fleecy granules that rubbed off easily. We later passed it on to Tony Leech, who was able to identify it as the second Norfolk record of Cystoderma moelleri, which was good as we weren't even sure what genus it was. 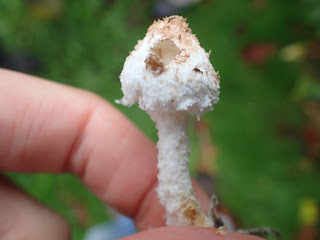 Whilst standing by a Beech tree I picked up some leaves and showed Jeremy the leaf mines in them, and perhaps unsurprisingly they turned out to be new to the cemetery list (you can find lists and details about much of the cemetery's wildlife on the resources page of the Friends of Earlham Cemetery website). Later on I added another couple of leaf mines on Silver Birch leaves, including Stigmella luteella which was one I hadn't recorded before. 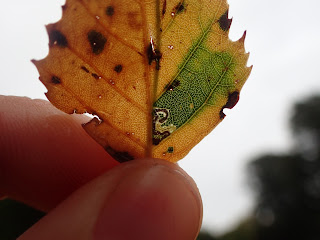 Moving on we saw some oldish Striated Earthstars and the yellow cup fungus Sowerbyella radiculata. The highlight of the walk came when Vanna found some Clouded Agarics with Piggyback Rosegills growing on them. This species is not unlike the Silky Piggybacks that I saw at Somerleyton growing on Blackening Russulas, and is rather uncommon so a great find. 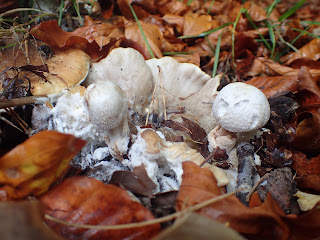 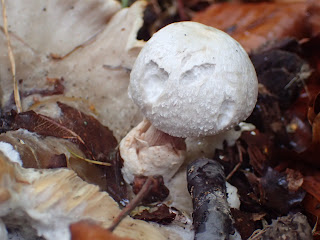 There were three more interesting finds, a pinkish Mycena that turned out to be Mycena metata, Smoky Domecap (both identified later by Tony) and Inkstain Bolete. I had only see Inkstain Bolete once before, around 20 years ago (I got interested in fungi at an early age!) so it was great to see this. The fruiting bodies don't look particularly spectacular to begin with, but stain a dark blue almost immediately once cut. Thanks to Ian for leading the walk and his local knowledge in locating certain species. 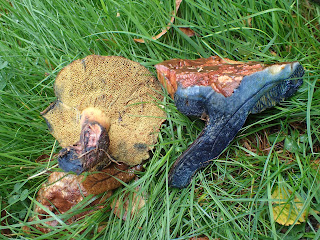