Around Sunday lunchtime a Wood Warbler was found at Mousehold Heath. At one point this species actually bred at Mousehold (early 1990s?) along with things like Red-backed Shrike, but those days are long past and I'd only seen a couple in Norfolk. As I had other plans for the afternoon I initially agreed that I would go and look for it on bank holiday Monday, but after our evening meal Cathy suggested that as it was a nice evening I should go and have a look in case it wasn't there on the next day, which proved particularly wise as after an early morning sighting it then went missing.

I arrived at the Gurney Road car park to find a group of LARPers* or similar were about to begin a quest. I was about to head off north-west as per the bird news service directions when a local birder entered the car park and said that he had just been watching the Wood Warbler in trees south of the road. Several other birders, including Ricky, emerged from the woods and a small group of us headed across the clearing near the golf course. Unfortunately there was no sign of the Wood Warbler, those who had already got glimpses earlier in the day or were time-pressured left, leaving just Pete and I to search for it.

Having waited a bit longer near the trees where the Wood Warbler was last seen, we decided to cross back to the car park in case it had doubled back to its original location. As we started to take that path we met another birder returning, having spent an hour unsuccessfully looking for it, so instead we checked some mature trees along the edge of the woodland in case it had gone that way. There was no sign of it, although there was a nice display of Lycogala slime mould (L. terrestre or epidendrum). 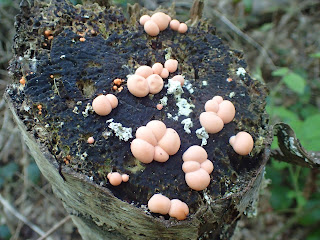 We decided to have one last look south of the road, and headed back to the area where it was last seen. Whilst listening out I became aware of the many insects flying in the evening sunshine, including lots of Nomada bees, which seem to be having a good year (either that or I'm just more aware of them these days). Unfortunately they were very skittish, so I couldn't get close enough to identify them. I scanned a nearby Oak and noticed some lekking Green Longhorn moths (Adela reaumurella). This interesting behaviour usually takes place highup, as these were, and involves many moths circling around a stationary one. The hoverfly Epistrophe eligans and Birch Leaf Roller Weevil (Deporaus betulae) were also noted. 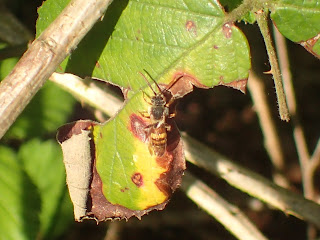 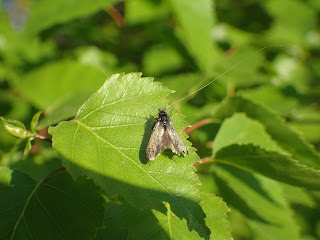 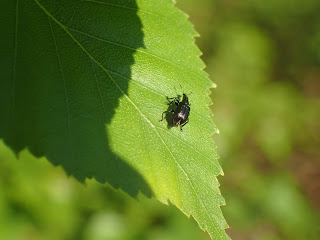 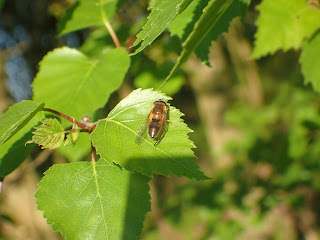 I was getting to the stage where I was going to have to give up and go home, when I heard a short burst of Wood Warbler song. Heading tentatively in the direction of the sound I heard a second burst, coming from a large Sycamore on the edge of the golf course. I looked around for Pete, who was further into the woods, and waved to attract his attention. Shortly after he reached me the Wood Warbler flew up into a large Oak and began to sing out in the open at the top. I tried to take a record shot, but in the end gave up and just enjoyed watching it. I texted out the location details in case anyone was still looking for it, by which time it had moved into a different Oak and stopped singing. A very enjoyable evening out and an excellent Norwich bird, so thanks to the finder. 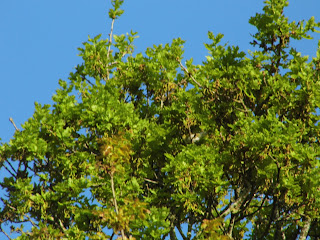 * LARP = Live Action Role Play. People dress up as fantasy characters and then act out a sort of game in real life. Of course it could have just been some very eccentric people.
Posted by James Emerson