On Friday night a White-tailed Eagle was found in the broads. They are fairly frequent visitors to the county, but can be rather difficult to see as they roam widely. As it was still present on Saturday morning Cathy kindly agreed to temporarily postpone our planned Bluebell walk to look for the eagle. It had last been reported in the Martham area, so I decided to head for Rollesby in the hope that it would show over the broad. Whilst at Rollesby we had a quick look at the widely lauded/derided (delete as applicable) Cinnamon x Blue-winged Teal hybrid that has been present of late, paired up with a female Mandarin. I also realised that the Common Terns flying about were my first of the year. 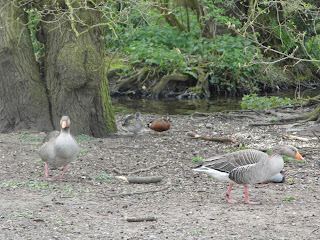 (there are many better photos of this bird online - see those taken by Dave Appleton, Chris Lansdell, David Norgate etc.)
With no sign of the White-tailed Eagle, and no further news from anywhere, we drove through Marsham and then along the Horsey straight, before parking up for a cup of tea. I heard a Cuckoo calling in the distance (another year first), and saw Marsh Harriers and Buzzards up, but no luck with the eagle. After a few hours we gave up and went to lunch at Waxham Barn. The Eagle was later seen around Fritton, although on Sunday it was seen over Sculthorpe. My only chance now is if it flies over the city centre whilst I'm on a lunch break! 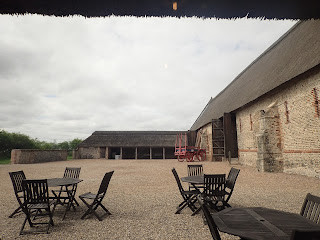