On Sunday the North East Norfolk Bird Club had organised a walk taking in Weybourne Camp, an area not usually accessible to the public, before heading past Kelling Water Meadows and across Muckleburgh Hill. I decided to attend to get a good look at the camp, and a lot of other people had the same idea. The meeting point at the Muckleburgh collection car park was already busy when I arrived, and by the start time around 50 birders were present!

We were led round by Moss Taylor, who has been visiting the area for over 40 years. We scanned some fields for migrants, seeing Stock Dove and a couple of Brown Hares, before heading over to the eastern edge of the camp. My first Wheatear of the year was seen, followed by another new year bird as two Whimbrel flew in off the sea. Sedge Warblers and a Cetti's Warbler called from the reedbed before we had a quick look out to sea.

There are some excellent looking bits of scrub on the camp, and a couple of Stonechats and a Lesser Whitethroat were present. A Whinchat was also found on a row of posts nearby. I hadn't seen many insects at this point, but we began to see large numbers of Brown-tail moth caterpillars in their communal tents. 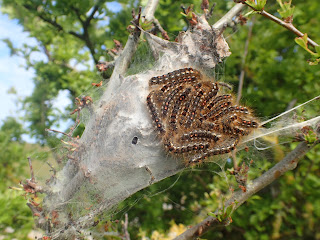 We left the camp onto the coast footpath, stopping to to watch a colony of Sand Martins at the western end of the sandy cliffs. A couple of Grey Partridges flew up just before Kelling Quags, and a Yellow Wagtail was present at the edge of the water. At the end of the track a Hobby flew over, and as we walked along the edge of Muckleburgh Hill a Red Kite glided high above us. The last couple of birds of the walk were Willow Warbler and Bullfinch, before we returned to the cars.

Many thanks to Moss Taylor and the NENBC for organising access and for leading the walk.
Posted by James Emerson