Having been busy in the week, a bit of free time on Friday evening allowed me to get down to Whitlingham to have a look at what had arrived since my last visit. The weather was breezy and overcast, but that did mean that a flock of hirundines were swooping low over the Great Broad. Most were Swallows, but after a bit of scanning I was able to make out some Sand Martins and a couple of House Martins. Birdsong was muted, but I heard my first Sedge Warbler and saw my first Whitethroats of the year, and also was treated to a few bursts of Nightingale song.

At the east end of the broad I was looking across to Thorpe when I noticed Ricky and Mary Walker on the far bank. Ricky called across, confusing a man in a boat that had just gone past, before reverting to mobile phone. They had seen two Common Sandpipers, which weren't visible from Whitlingham, but just after I had continued on my way they had a Marsh Harrier, and thanks to another phonecall I headed back to the bank and saw it soaring over the marsh.

I stopped and had a look at a small weevil on a Garlic Mustard plant, that Tim Hodge kindly identified as probably Cabbage-stem Weevil. Around the corner was a real highlight, a Water Shrew scurried brazenly across the path and down to the waters edge. I've only ever seen one before, so to get such good, close views was a real treat. There wasn't much more about birdwise, but the Bibio flies were worth a mention - as well as the large St Mark's flies there were lots of orange-thoraxed Bibio anglicus amongst the nettles, and I saw another interesting sawfly, possibly Pachyprotasis rapae, but it is hard to be sure when there is no available field guide to them. 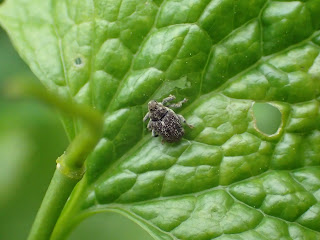 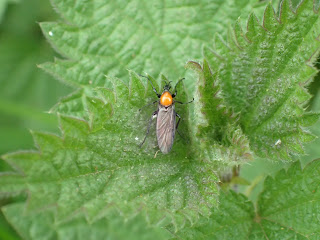 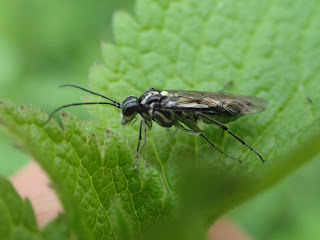