On Saturday the Norfolk Fungus Study Group assembled at the hamlet of Frogshall in north Norfolk, to survey the estate at Templewood. The owner, Eddie Anderson, manages his estate with wildlife in mind, and was keen to find out about some of the fungi occurring there. We had been unable to fit in an autumn foray onto the schedule, but were confident of putting together a reasonable list because of the areas of wet woodland, which are fairly productive, even into late spring.

After meeting Eddie and hearing a bit about the area, including the River Mun (apparently Norfolk's second shortest river) that runs through the estate, we set off towards a small ornamental pond. The first fungus of the day was a rust of Dog's Mercury, but we also had a quick look at the Gunnera. On our way out of the wood a second look produced a fungus growing on decaying leaves - potentially interesting given that this species is only grown ornamentally in the UK, but also potentailly frustrating as it is not included in the go-to plant fungi book (Microfungi on land plants by Ellis & Ellis).

As we walked through the wet woods we began to record small species growing on wood, before Anne found a Vinegar Cup (Helvella acetabulum), a member of the 'saddles' that looks like a cup fungus on a twisted stalk. This was a new species for me, so I was pleased to find several more whilst looking nearby. I also found a Yellow Shield (Pluteus chrysophaeus), to renew faith that we would find some gilled fungi!. 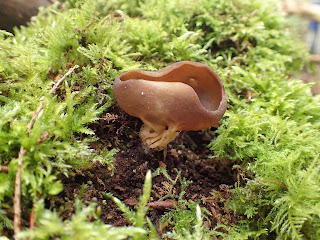 We found a few more bits and bobs, including Pine Cone Cap and Dewdrop Bonnet, before deciding to turn round and try another block of woodland. I crossed the Mun to check out an open area of fallen trees on the far bank, but only added Silverleaf Fungus to the tally. The sun shone as we entered an area of wet grassland, pausing to watch several Orange-tips fly by. Several hoverflies and Andrena bees were also seen, and Tim caught an interesting Weevil. We carried on into some hazel woodland, where we saw some Twayblades just emerging and an Early Purple Orchid amongst the Wood Sorrel and Moschatel. Ear Pick fungus and Primrose rust were the best finds here. 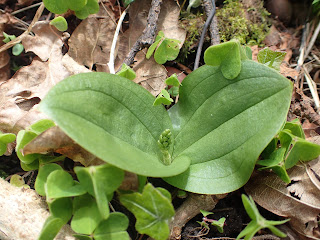 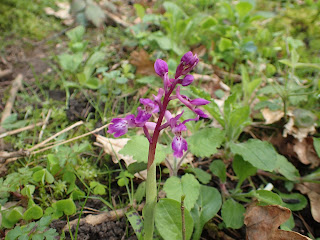 Stephen & Yvonne had to leave, but the remaining members headed up to a dry area for lunch. On the way Anne found a pored crust fungus that she causally identified as Dichomitus campestris, which having looked up when I got back could well be the first Norfolk record. As expected we found fungi harder to come by in the drier areas, with not much to repay our effort, but there was a late flurry of species on our way back, with Amethyst Deceiver, Beechmast Candlesnuff and Dead Man's Fingers found. I also found a couple of small brown toadstool types that may be Cortinarius, so hopefully an ID to come for that one [Edit: they were Naucoria bohemica, which I've not recorded before]. 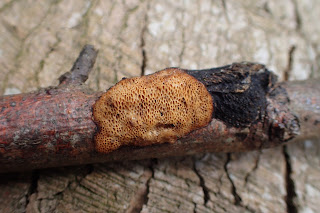 We enjoyed our visit and recorded over 40 species, certainly enough to justify a return visit in season, so were grateful to Eddie for inviting us to record on his land.
Posted by James Emerson