On Sunday Cathy & I headed to Holt country park to see an unusual fungus that had been found growing near the sensory garden. The fungus in question is the False Morel (Gyromitra esculenta), which had only been recorded on three previous occasions in the county. I had been given directions by Will, the ranger here, however fortunately there was a very obvious feature to mark the location - the sculpture of a bear! Cathy had soon located a number of fruiting bodies, most of them starting to go over, but one was nice and fresh. After admiring the false morels, we walked a short circuit that took us past the lake, before heading off for lunch. 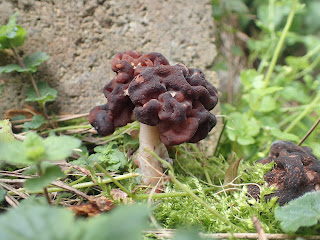 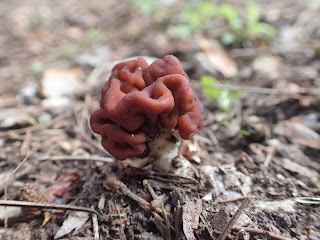 We had some food at the cafe at Natural Surroundings, before popping in to see the ever helpful people at Cley Spy to get a new binoculars case. The weather was still good, so on the way home we stopped off at Horsford Woods for another walk. The path was lined by flowering gorse and broom, and Linnets called from the trees nearby. A look at a clear-felled area produced a Common Lizard, whilst we heard more running off into the undergrowth. Next to the path were some deep but presumably only semi-permanent narrow ponds. Looking into them we saw several water beetles, and noticed that they were particularly well-marked. I think they are Acilius sulcatus, a species that I've not seen before and has presumably colonised by flying in, something that won't surprise anyone who has caught water boatmen in their moth traps! 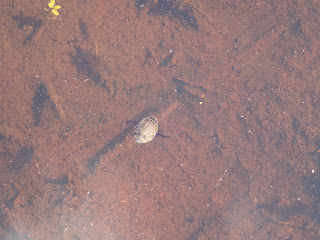