A week ago Cathy & I had visited Holt country park to see my first False Morels. Today we returned along with Margaret, to see some 'true' morels, Morchella esculenta*, again found by Will. The False Morels have a folded texture, whilst these morels were larger and have a honeycomb look about them. We saw 11 along a path close to the car park. 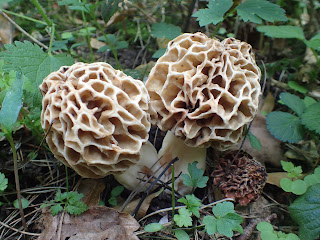 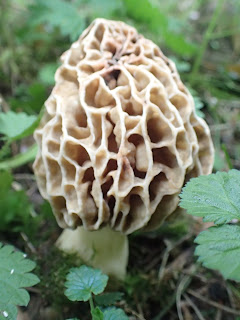 After our brief stop at Holt we carried on to Cley NWT visitors centre, where we had lunch and had a look at the art exhibitions. We then spent some time in Dauke's Hide, where the highlights were a male Bearded Tit, constantly squabbling Shelduck and a showy Lapwing. When the sun came out I checked the Alexanders for insects, picking out the hoverfly Helophilus pendulus, 2-spot Ladybird, 7-spot Ladybird and Harlequin Ladybird amongst the small unidentified flies. 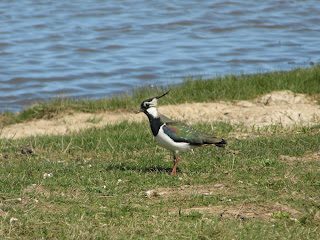 After our Cley trip we called in again at Cley Spy, where I saw my first House Martin of the year flying over nearby buildings. A couple of Buzzards soared up close by too. On the outward journey we had been diverted as the Holt Road was shut for NDR work, so on the way home I decided to divert via Roughton. This proved to be a mistake, as there were delays to put in a roundabout just outside Holt, followed by longer delays for another (seemingly pointless) roundabout near Felbrigg, with the roadworks at Burgh Road in Aylsham thrown in for good measure. What with the radio adverts about work being done on the railway, woe betide anyone who wants to actually travel in the holidays.

* The morels we saw look like Morchella esculenta, however morels are one of the groups were taxonomy isn't necessarily settled - it might be that in the future DNA testing shows there are more or fewer species than we currently think.