We've yet to start planting up our garden, but there are a few things left over, mostly Dandelions. It was on one of these that I noticed an interesting looking insect earlier this week. It had a wide abdomen made up of golden bands, and I recognised it as a species of Sawfly. It seemed a bit dopy, so I was able to guide it onto my hand for a closer look. I identified it as Honeysuckle Sawfly, but as this species wasn't on the last Norfolk Sawfly list (compiled in 2000) I asked county recorded Tony Irwin to confirm my ID, which he did. So far I have only heard of one earlier Norfolk record, seen in Beeston Common in 2015, so this was an excellent garden sighting. 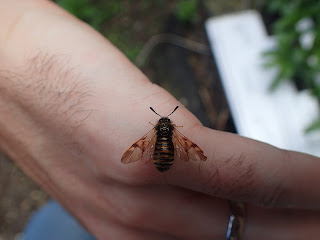 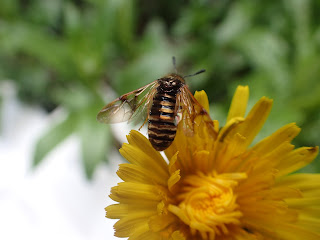 The following day I noticed a moth had landed on the outside of the living room window. I went outside and caught it, and after a closer look I was able to identify it as a Sulphur Tubic (Esperia sulphurella), a reasonably common but attractive moth. 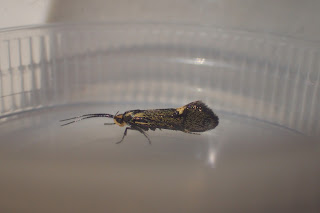