On Saturday I heard that Mark Joy had been checking churchyards in Norfolk and Suffolk for fungi, and had already found several earthstars. Earthstars occur fairly regularly in churchyards because quite a few species are associated with mature Yew trees, a regular feature of burial grounds. One of the species that Mark had found in Suffolk was the Arched Earthstar (Geastrum fornicatum), a species I'd not seen before. He kindly gave me directions, so on Monday Cathy & I went for a drive into Suffolk to track them down. We were fortunate that there were still some fruiting bodies in reasonable condition, although most were going over (and some had been decapitated!) 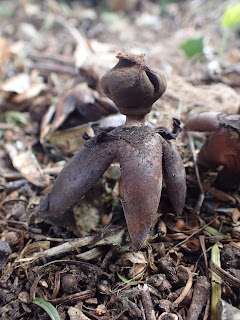 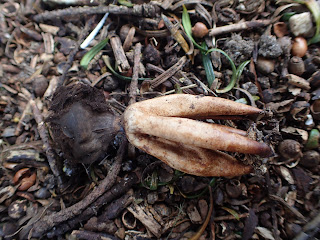 When the rays extend fully the earthstar is no longer supported very well and prone to toppling over. It reminds me of something, possibly the robot jellyfish from The Matrix.

Hopefully this post gives readers encouragement to check out their local churchyard, particularly near old Yew or conifer trees, to see what you can find!