The hottest day of the year so far was a boon to ice cream sellers and people who wanted a tan, but for birders generally just meant more people out and about. At Whitlingham this translates to more people allowing their dogs to chase the wildfowl, in one case seemingly co-ordinating with a family who drove a model speedboat through the swans that had only just been sent into the water by a bounding dog. Still, on the plus side, there were quite a lot of butterflies about, including my first Orange-tips of the year.

Once again Garganey-watch came up empty handed. Tufted Duck numbers still pushed towards 100, but other than that a lone Gadwall at Whitlingham and five at Thorpe were the last of the wintering wildfowl. A pair of Egyptian Geese were on the slipway - usually they would have young by now, which suggests they have been unsuccessful this year. Mute Swan, Moorhen and Great-crested Grebe nests were all seen.

I heard my first Willow Warbler of the year (although it has been present here for a week), but I didn't hear any Sedge Warblers or Whitethroats, and no hirundines flew over either. The highlight of the remainder of the walk was a nomad bee, I think Gooden's Nomad. 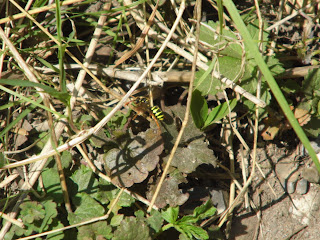 As Cathy was in the city I decided to head round to Thorpe Marsh, and having parked up in a very busy Thorpe St Andrew I saw my favourite species of the day, the distinctive bee Melecta albifrons, a brood parasite of Hairy-footed Flower Bees. I'd never seen one before, so finding one on Green Alkanet at the pavement edge was a pleasant surprise. 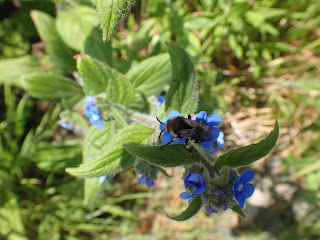 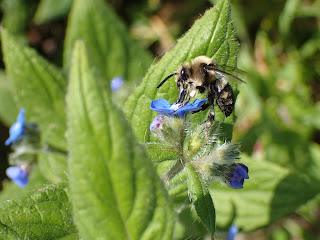 At Thorpe Marsh I noticed a couple of people photographing something on the marsh, so went over to see what they'd found. It turned out to be Chris Durdin and Derek Longe, who were checking the Cuckoo Flower for Orange-tip eggs. Despite quite a few adult butterflies being seen no eggs were found - it's probably a few days too early. After a chat I carried on around the marsh, watching several singing Linnets but carrying on the theme of not seeing any more spring migrants. Perhaps my next visit will be the one that is full of hirundines.
Posted by James Emerson