BROADS: A first visit to Alderfen

I started a wildlife-filled weekend with a visit to Alderfen Broad, one of the few Norfolk Wildlife Trust reserves in east Norfolk that I hadn't previously visited. The reason for going was as part of the Norfolk Fungus Study Group programme, but I suspected that given the time of year I was more likely to see new insect species than fungi. The reserve is down a long un-made and un-signed track - fortunately Yvonne was posted on the road to direct us, although I still got the impression that we could end up in a farmyard or discovering a long lost tribe as I travelled along it.

Whilst waiting at the car park I looked around and found an interesting beetle, Malthinus flaveolus. This is one of a sub-family related to the soldier beetles, and my first of this genus. Once we had all assembled we headed off around the circular trail. Tim took the path into the open area, whilst the rest of us went into the woods. We found a few microfungi, including some small black spots on Holly twigs that are probably a second for Norfolk. Tawny Grisette and a Bolete sp. were two of the larger species found. 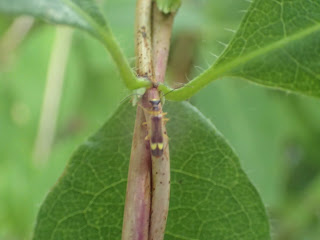 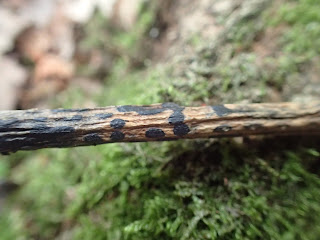 It began to drizzle, but this first shower just passed over. Raspberries, Redcurrants and Blackcurrants all grew near the path, distracting the hungrier amongst us. A few more small agarics were found, Tubaria, Rickenella, Marasmius and Mycenas. A couple of Willow Emerald Damselflies were present, along with a Chrysotoxum bicinctum hoverfly. 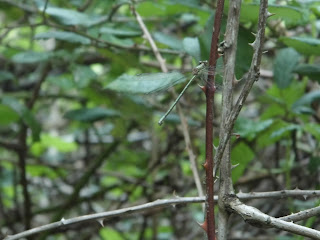 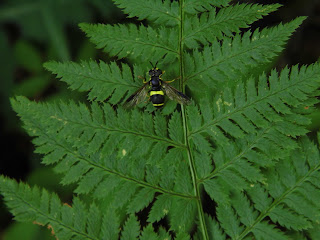 Out in the open we met up with Tim. He pointed out a few things he had found on his walk, including Swallowtail caterpillars at various stages and an interesting moth caterpillar, possibly Pebble Hook-tip. He had also caught a Xylota-type hoverfly that turned out to be Chalcosyrphus nemorum, which was new for both of us. 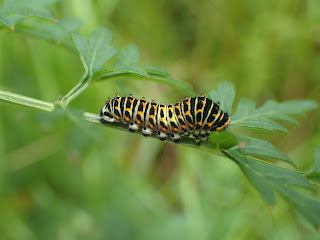 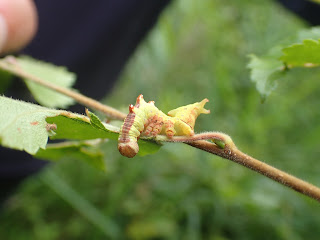 Tony had a look in the reedbed by the path and found probably the most interesting fungus of the day for me, some tiny cups growing on a dead umbellifer stem. After lunch some of the group headed back into the reedbed, whilst the others tried the woodland. By now it was raining steadily and there didn't seem much about amongst the Bracken, so I returned home to spend some time with Cathy before heading out later that evening. 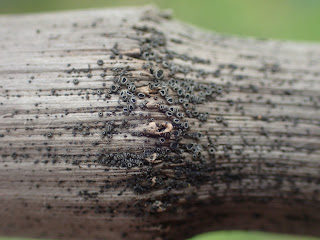 As yet unidentified!
Posted by James Emerson