I spent most of Saturday at a cousin's wedding, but before getting ready I decided to have a quick look in the garden. This proved to be a good decision, with two interesting species found. The first of these was a groundbug, Nysius huttoni, which I found in a sunny spot on the side of the shed. This genus is quite tricky to separate so I asked Tristan Bantock (webmaster of the excellent British Bugs website) if he agreed with my ID, and he did. Fortunately this species has long hairs around the edges, which were visible on my photo. NBN didn't show any Norfolk records, so I contacted Norfolk bug recorder Rob Coleman to check the current status of this species. He has just got back to me and apparently it was first seen in Norfolk in 2014, but the only records have come from the Brecks, making mine the first East Norfolk vice county record. 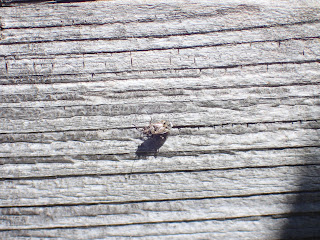 The second species of note was a leaf miner in a yellow flowered plant in the back garden. Nick and Jeremy helped me with an ID of the plant, Rose of Sharon, a Hypericum (same family as St John's Wort). With the plant ID sorted I could then search for insects that leaf mine it, and quickly established that the leaf mine was created by the larva of the Hypericum Pigmy moth (Ectoedemia septembrella). It is described as 'local' on the Norfolk Moths site (see here), and my record was the first TG21 record, which was pleasing. I may try to put some muslin around a mine to try to catch an adult if I get round to it. 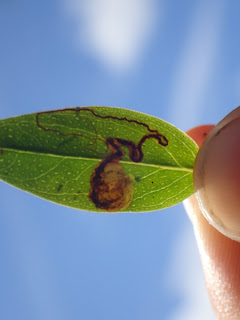