This weekend there was a bioblitz all along the north Norfolk coast, from Holme to Salthouse. In terms of species recorded it was a success (Holme managed to rack up over 1000 species alone!), but I couldn't help think that the idea of a bioblitz was to concentrate the recording effort on a particular site rather than spread it over 30 miles. Another slight bugbear was that although there were a number of  activities arranged, despite looking regularly I only saw the definitive list when it was tweeted on Saturday morning.

Anyway, Saturday was allocated to rest and then WeBS, so I turned up at Holkham on Sunday morning, hoping for a good catch in the moth traps. It was rather windy, so having seen what the conditions were like I wasn't that hopeful, and this was vindicated when less than 40 species were recorded across three traps. A couple of micro moths were new, along with Pine Carpet apparently. 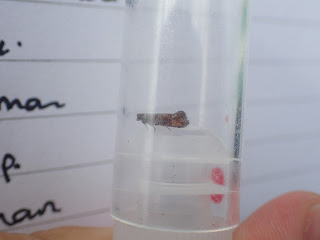 My plan for the afternoon had been to do some general recording and look for one of my target species, Yellow Bird's-nest. I asked Andy Bloomfield if any of the latter plant was still around, but was told it had all either died off or been eaten, so that was that out. Stewart Wright was also going for a walk and hadn't seen Creeping Lady's Tresses before, so we had a look at leaf-mines before heading into the pines. Stewart also found the 'sputnik' egg sac of the spider Paidiscura pallens. 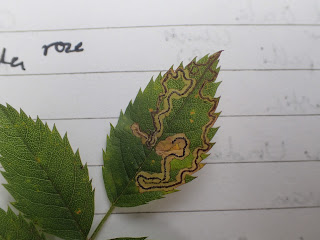 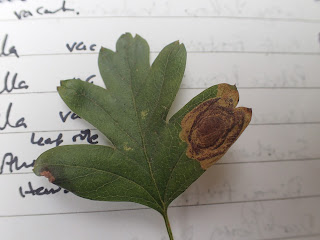 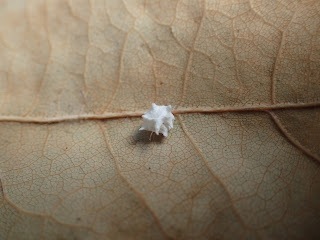 On the way along we stopped to look at some Ant-lion pits, my first Norfolk ones having seen them previously at Minsmere, but couldn't find any Yellow Figwort. The first spot where I saw Creeping Lady's Tresses last year seemed devoid of plants, but nearby I managed to find about ten flowering spikes of this unobtrusive orchid. 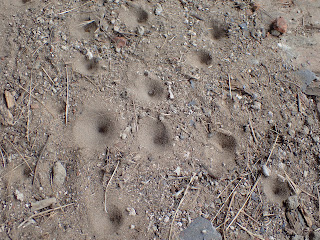 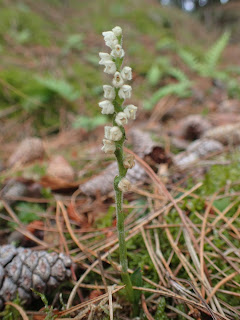 It was now starting to drizzle, but Stewart was keen to look for the rare micro moth Norfolk Owlet, so we headed into the dunes to look for it. The rain got heavier, and although my umbrella kept my head and front dry, my back, bag and legs got soaked. We didn't find any Owlets, not surprising given the weather, but I did find several interesting new invertebrates, notably Dusky Longhorn Beetle, Field Cuckoo Bee and Large Sharp-tailed Bee. 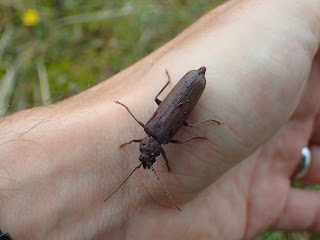 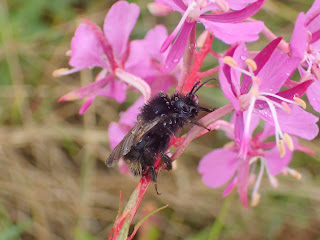 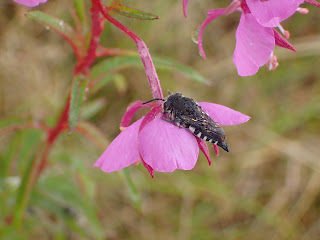 Some of the fungus study group were heading into the reedbed at Cley in the afternoon to look for reedbed fungi, but given that it was still raining I decided to give it a miss. After eating my lunch in the car I headed back towards Norwich, passing the first parts of the traffic chaos that was to delveop as a result of the Holkham Country Fair and Tom Jones concert. As I got closer to Norwich it wasn't raining so I diverted to Buxton Heath to look for Marsh Gentians. I didn't see any in the first 20 minutes before once again it began to rain. I finally took the hint and went home.
Posted by James Emerson