Some readers will not be aware that Saturday was national meadows day, and over the weekend events had been arranged in meadow habitats across the country. On the whole I'm not a fan of national days, mainly on account of there being far too many. To illustrate the point I googled the 2nd of July and found that (albeit in the US) it was also anisette day, build a scarecrow day and world UFO day.

Anyway, whilst nobody had asked me to sample anisette, build a scarecrow or claim a close encounter, I had been asked to lead a walk at Strumpshaw Fen, with the intention of showing visitors the range of plants and insects that live in this valuable and decreasing habitat. I arrived a bit early to have a look around before the walk, but spent most of it watching insects around the reception garden. A Swallowtail butterfly flew over, two Woundwort Shieldbugs were mating and at least two species of Yellow-faced Bees were also seen. 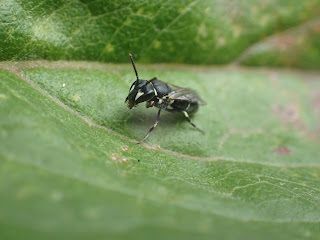 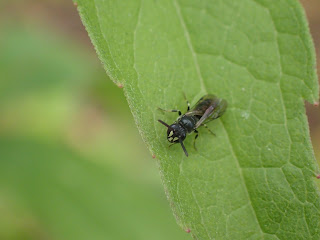 After meeting the small group and David, one of the volunteers, we made our way down towards the meadow trail. We diverted into small grassy quarry meadow, where we had a look at the hybrid orchids and a Black-and-yellow Longhorn beetle. Further along the path I noticed a Common Carpet moth and a Banded General soldierfly, the latter of which unfortunately flew off before the rest of the group saw it. A White Admiral flew around the brambles near the new pond, and the black and red bug Dereacoris ruber was also seen here.

At the pond we paused to watch the water boatmen, then I explained how separate Water Figwort, which was growing at the edge of the pond, from Common Figwort and Green Figwort. Looking closely we saw Figwort Weevils, and a Figwort Mason-wasp was also in attendance. 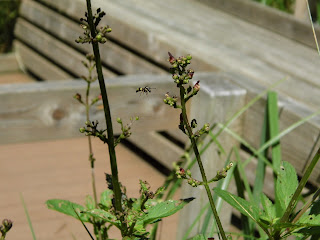 Finally we entered the meadow, and David took us along the edge where we saw some Skullcap. Whilst here I picked out a Variable Damselfly amongst the Azures, and two more White Admirals were seen. Another plant we looked at was Fen Bedstraw, which has a rough feel to the stems unlike the very similar Marsh Bedstraw. Walking across the meadow we stopped to look at some mid-instar Short-winged Coneheads and a predatory bug sp.

I did a bit of sweep-netting, producing some froghoppers and an adults female Short-winged Conehead. We also went over and had a look at some Marsh Helleborines and Bog Pimpernel before heading over towards the main dyke. A Norfolk Hawker gave excellent views as it flew towards us and hoverered a few feet off the ground, showing the green eyes. I found one of the scarce reed beetles, Plateumaris braccata, to show the group and we also saw some Brookweed, which is apparently a new species for me. Whilst looking at the Brookweed Steve Lane, a national beetle expert, came over with Andy Brown to show us a Marsh Click Beetle and have a chat. They also gave us directions to another rare reed beetle a bit further round. 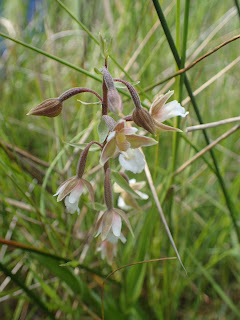 We crossed the bridge onto the other half of the meadow, pausing to look at the Water Soldier in the dyke. On the other side we noticed the slightly different flora makeup, and saw plants like Marsh Lousewort and Yellow Rattle. There was a lot of dragonflies here - as well as the Norfolk Hawkers we saw Southern Hawker, Four-spotted Chasers and Black-tailed Skimmers.

We left the meadow and followed the path back, stopping at the edge of the river Yare where Steve and Gill spotted a mating pair of Donacia crassipes, the reed beetle that Steve and Andy had seen earlier. Walking back along the sandy path we continued to see interesting invertebrates, including a Six-spot Burnet Moth. 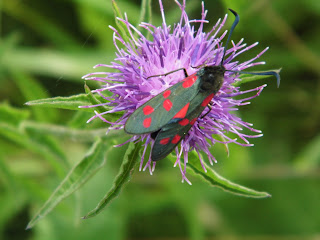 Thanks to everyone who came along, and remember, meadows are great.