This weekend was WeBS weekend, and as there was a range of events at Whitlingham on Sunday I thought it prudent to get the wildfowl count done on Saturday. The Little Broad count was trickier than normal thanks to the grown up vegetation around 95% of the edge, but there were hardly any birds on it anyway. As is typical of mid-summer counts there was a lot of the common species and little else. Main species counts were:

The summary of which is that numbers of most species were similar to last year, with the exception of Mallards, which were much more numerous this year. In fact Justin had over 200 in mid week. In contast last year numbers only peaked at 120. There was no sign of the neck-collared Greylag. Two Linnet were the only passerines of note.

Of the invertebrates there were three Volucella inanis hoverflies and two new patch beetles. The first one was Potato Flea Beetle (Psylliodes affinis), feeding on Woody Nightshade (this isn't as odd as it first sounds, as potatoes and nightshades are part of the same family). The second one was Loosestrife Weevil (Nanophyes marmoratus), something that Tim Hodge had told me about at Alderfen and I found by shaking some Purple Loosestrife flowerheads. 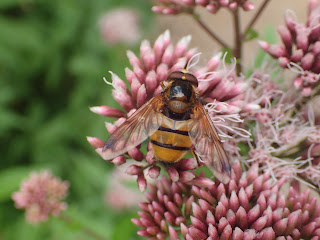 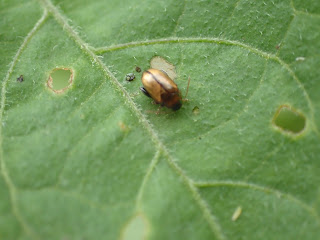 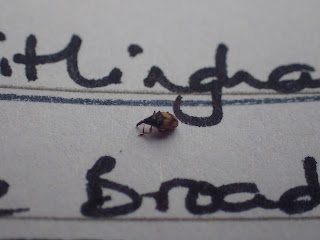 As I completed my circuit I noticed an uprooted mushroom by the pathside. I showed it to Tony Leech on Sunday and he identified it as Pavement Mushroom, Agaricus bitorquis. Interestingly the species epithet translates as "two torques", and refers to the fact that the stipe has two rings -  a large floppy one and a smaller one underneath. I've seen it before in Norwich, but it was another patch first. 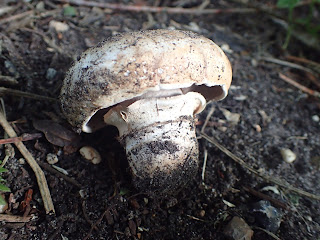