After lunch I headed to Catton Park for a walk around in the sunshine. As I arrived I noticed signs advertising a swing concert in a couple of hours time, which sped me up a little. I have nothing in particular against swing music, but I'm not convinced it does anything to improve your observation and ID skills.

The first thing I noticed was that there had been a big emergence of Six-spot Burnet Moths. I saw at least 30, some feeding on Knapweed and Scabious flowers, others buzzing slowly over the meadow. I also saw several vacant chrysalises poking out of the yellow cocoons - see photo below. 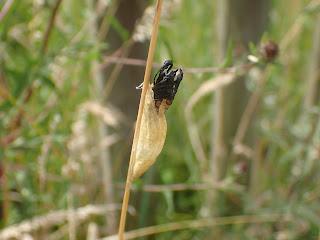 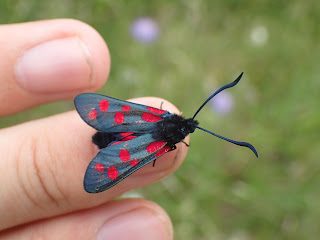 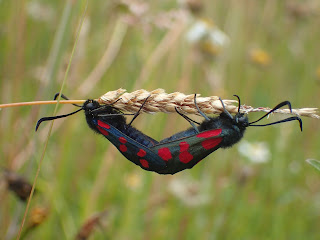 There was a lot of different species about, so this is only a selection of highlights. Some Colletes bees were feeding on Yarrow - technically these cannot be assigned to species without closer examination, but the size, location and flower choice point very strongly to them being Colletes daviesanus, which I've not seen before. Of more interest to me it is the host of a very cool looking bee Epeolus variegatus, which I'll certainly be keeping an eye out for. 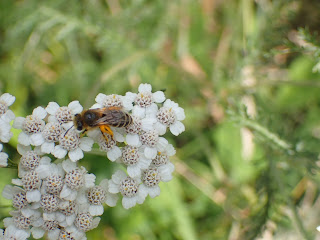 I had a close look at quite a lot of Skippers and confirmed both Small and Essex (mostly Small). There were three sawfly species, of which I could only identify one. I'll give Norfolk's new Sawfly recorder a few weeks to get used to the role before I trouble him! Two shiny black hoverflies were also seen, Cheilosia pagana and a Pipizella sp. The latter was new to me, but could only be confirmed to species by examining the male genitalia, which I didn't do. Potato Capsid was a new bug too. 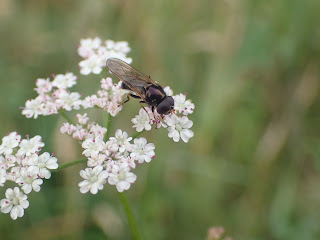 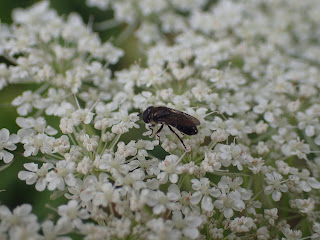 Carrying on my leaf mining theme from Saturday I noticed the 'snail-trail' mine of the Poplar Bent-wing moth, which was a new TG21 record. I was considering heading home when a few drops of rain fell, speeding me up. The concert was yet to begin, so as I left the only noise was the constant hum of distant traffic and the names of the many dogs being frantically called by their owners. 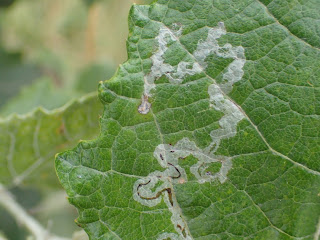