Early in July some tweets started appearing with the hashtag #Snettshide, a short video of some Knot and the tagline "Keep following #SnettsHide for all the latest information on what's happening on the 10 July. Stay tuned if you #LoveSnetts"

This was of course designed to build up interest in whatever was being unveiled, something to do with a hide at Snettisham. But what could it be? Was the hide going to feature as the TARDIS in the new series of Doctor Who? Had Ed Sheerhan's Game of Thrones cameo been filmed there? Perhaps it had been built underground as was going to rise up out of the earth whilst Wagner's Ring Cycle was played by a live orchestra?

Well no, the big reveal was that the RSPB want to build a hide to replace the two lost in the 2013 storm surge, and have launched a crowdfunder appeal for funds. The design is pictured below, but you can see it in situ and donate to the fund here: http://www.crowdfunder.co.uk/snettishamhide 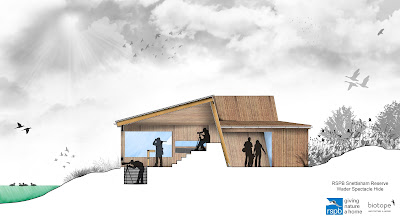 Birders are a cynical bunch, and whilst many were immediately supportive, there were also quite a few questions about the hide. The RSPB have provided the answers to many of these common questions here: http://www.rspb.org.uk/community/ourwork/b/east/archive/2017/07/13/rebuild-snettisham-hide-crowdfunding-campaign-things-you-might-find-interesting.aspx. A blog entry that just directs you to another website isn't very fun though, so here are some of the points I've seen mentioned, along with either the RSPB comments or my opinion.

1) Does a hide really cost £120,000?
This is a genuine question, because most of us have never built a hide before, and the old ones do resemble large sheds. It does seem expensive, but the link above explains the reasons for this - it has to be reinforced because it is being built on shingle, has the capacity of two previous hides and will require specialist equipment to build it because of the location. It also has a pit to put photographers in for photographers to go in.

2) Is it being designed by the same people as the Parrinder Hide?
The Parrinder Hide at Titchwell is an award winning hide, but it is perhaps arguable that hides do not need to win awards. The Parrinder design was not universally popular - "Ikea meets a World War 2 bunker" being one of the more family friendly descriptions. The main concerns are two-fold, that the hide would stick out in the landscape and cost more than necesary because of funky architecture. Again the RSPB link reassures us, this hide has a different designer, will fit in with the landscape and is designed purely for functionality.

3) Why use a month-long crowdfunder appeal?
I must admit I wondered this. A month is not a long time to raise that much money. The link provides an answer, but to my mind it doesn't really say why crowdfunder was thought to work better than a 'normal' campaign. It does mean that there are a number of 'rewards' for donating certain amounts. Donate over £30,000 and you might be able to name the hide! If you do, remember that rare birds might be seen from it and be reported on RBA, BirdGuides etc, so definitely don't call it the stringy sightings hide, that would be confusing.

4) Is a hide the best use of money when other organisations are trying to buy reserves?
Now lets face it, the RSPB have to carry on and raise as much money as they can for their own projects, regardless of the activities of other organisations. That said, many of the potential donators will have donated to appeals for  Cley/Salthouse Marshes and Hickling Broad, and might be wondering whether to donate to this too. When faced with appeals I tend to apply a sort of multi-factor analysis to make up my mind.
Factors I consider include:
Given my first two considerations, it would be hard (in my opinion) to argue that someone with enough benevolence for one more project should donate to the Snettisham hide rather than helping Suffolk Wildlife Trust buy the adjoining land at their Carlton Marshes reserve (see details here: http://www.suffolkwildlifetrust.org/suffolkbroads )

That said, it does look like a nice hide, so if you can stretch to donating to two projects, or have a connection to Snettisham then they will be grateful for your donation.

Details of the Snettisham crowdfunder appeal are here: http://www.crowdfunder.co.uk/snettishamhide
Posted by James Emerson