In the evening I headed out to help with a bat survey. Ecologist and Norwich Bat Group member Abi had been working with a church that was in the process of commissioning a new roof, and had discovered Serotine and Pipistrelle bats using the church. She had identified where most of the Pipistrelles were exiting, but wanted to locate the Serotine exit points so that gaps could be left in appropriate places. The simplest way of doing this was for people to be placed around the churchyard watching different points. Fellow Norwich Bat Group member Graham and I both volunteered, whilst several locals also came along, making eight of us in total.

I arrived at the church about half an hour before sunset, and was shown a Barn Owl perched up in a tree just inside the churchyard, a silent white sentinel keeping watch on the church. Abi showed us inside the church, where we saw the piles of droppings indicating the likely roosting areas, and also some feeding signs - the bats clearly had a liking for Yellow Underwings! 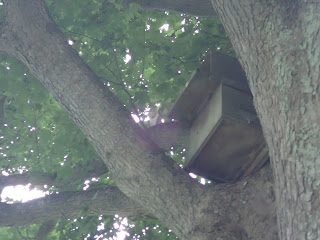 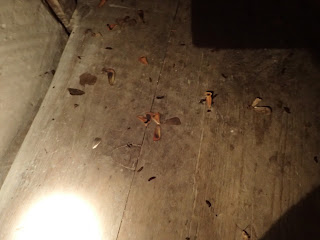 Twenty minutes before sunset we had assumed positions around the church. My main focus was the flashing between the main roof and a gable where a smaller part of the church joined on. I pitched my camping chair and sat back to begin my vigil. It was surprisingly serene, despite the traffic noise and a nearby combine, that only stopped working at dusk. 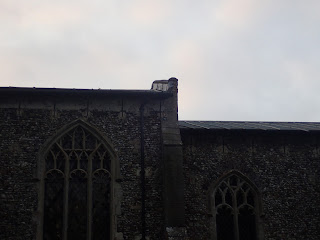 Dusk came and went, a lone Swift flew over and a Kestrel did a couple of flypasts. Ten minutes later our first bat emerged, a Soprano Pipistrelle. It was to remain in the churchyard for the rest of the time we were present, circling and darting in front of us. Thirty minutes after dusk and we were beginning to wonder where the Serotines were when I picked up one on my detector. Graham confirmed it (he was using a more advanced detector that displayed sonograms), but neither of us could see that bat. More Pipistrelles were seen, but finally at ten o'clock another Setotine was detected, and flew right in front of us. It defintely didn't come from our 'sectors', and appeared to have flown through the trees rather than from the church.

We remained in place until an hour after sunset, when the light was almost gone and the only sound was a distant Tawny Owl and the static of our detectors. There was one more Serotine flypast, again seen and detected, but it was probably the earlier individual. The most likely explanation for the low number of sightings and no sightings of exiting bats is that they are currently roosting somewhere else close by and using this church to feed in. So not the ideal result, but an interesting experience for me, seeing a new species of bat and reassuring me that I would recognise the echolocation signature of Serotines. Thanks to Abi for allowing us along and for showing us the signs in the church.
Posted by James Emerson