The second trip of my weekend of fungi took me to the grounds of Felbrigg Hall for a joint fungus study group and NNNS walk. High winds were forecast for the afternoon and I was a bit worried that we would be asked not to go into the old wood, but common sense prevailed and we were simply told to not stay anywhere we didn't think was safe. Tony's introduction warned participants that the recent spell of dry weather meant there were less fungi about than usual for the time of year, and with that off we went.

The group had been asked to record the area of woodland near the top of the 'victory V', but as with any wildlife group there was clearly much to stop and look at before we got to the desired area. Felbrigg has some good Waxcap grassland in front of the hall, and we soon found ourselves encamped there, taking in the multicoloured delights of Scarlet, Golden, Snowy and Parrot Waxcaps, the latter including some very deep green specimens. 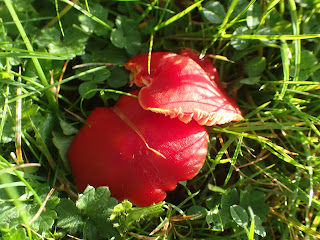 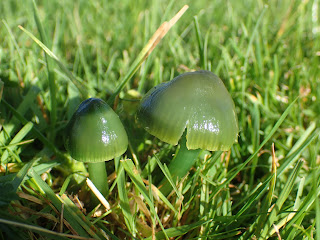 Further along we also encountered Petticoat Mottlegills, Meadow Coral, one of the yellow club sp and another coral, Ramariopsis kunzei. I decided to head off towards the woodland in an effort to speed us up a bit, but having seen the group behind remain static for a while I decided I should go back and see what they were looking at. I was glad that I did, because someone had found a Scarlet Caterpillar Club, a species I'd long wanted to see. This species is unusual in that it grows up out a buried moth pupa. According to Stephen and Yvonne it is common in north-west England, but it seems to be scarcer here in Norfolk. 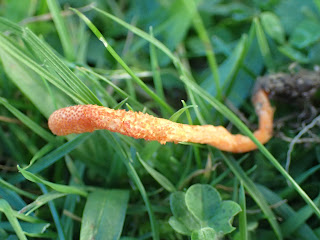 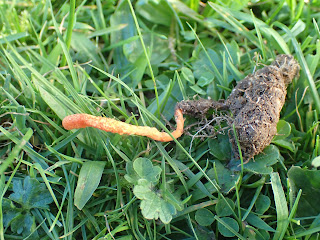 We left the grassland and headed up into the woods, seeing another flush of species including some pristine Oyster Mushrooms and some Spindeshank (apparently now renamed Spindle Toughshank). I took advantage of Stewart Wright's presence to find out about several leaf mines that were obvious due to the 'green island' effect amongst the brown leaves, including a new one for me, Ectoedemia subbimaculella. 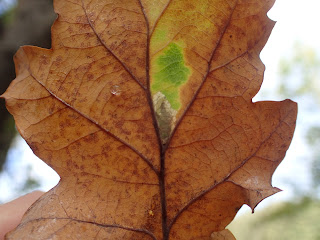 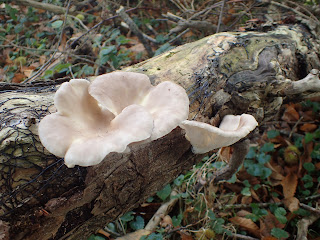 After lunch we headed up into the woods, finally getting to the area we were meant to be surveying. The species were being added to the list constantly, including charistmatic things like Beefsteak fungus, Dyer's Mazegill and Red-cracking Bolete, plus subtler ones like Beechleaf Bonnet, Beechmast Candlesnuff and Beech Jelly Disc (no prizes for guessing what the predominant tree species was!). 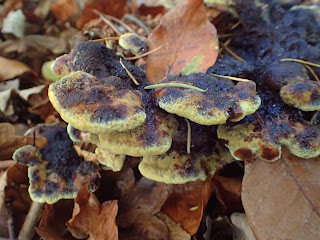 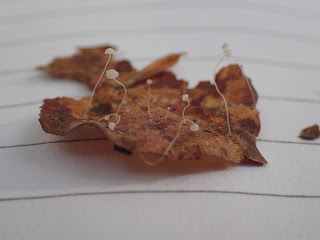 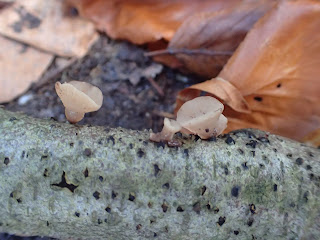 One of the more interesting sightings was a Stinkhorn egg. These are usually round and smooth, but the one here, presumably as a result of drying out, had formed a sort of geometric shape. We cut through to double check, and saw the top fully formed and ready to 'hatch'. After some photographs I put it back together, and based on other experience I think it will still grow. 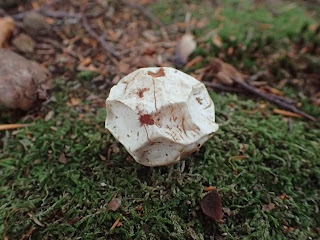 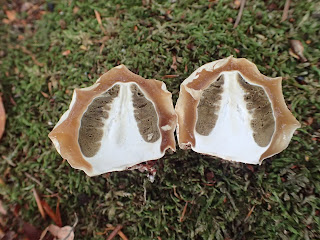 By the time we'd got back to the car park we had seen over 130 species, almost certainly my most productive foray ever!
Posted by James Emerson