The last fungus study group foray of the year was held at Foxley Wood, and there was a respectable turnout given the icy weather and various illnesses going around. We were also joined by Rob Yaxley, who has been getting more interested in fungi this autumn, and also used to visit Foxley regularly.

Steve found some Crepidouts epibyrus growing on leaves near the car park, before we headed off towards the older part of the woods. Our first stop was a log pile, where some Leafy Brain fungus was of note. We continued on into an area of mature Hazel, where we spread out to find as much as possible. Twig Parachute, Spring Hazelcup and some frozen Witches' Butter were the highlights here. 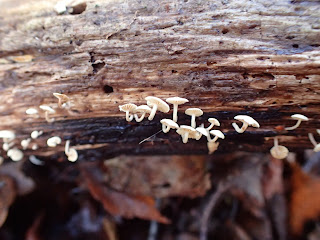 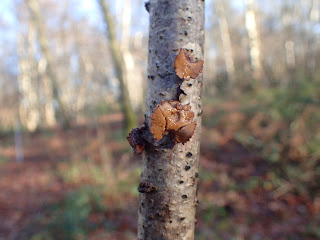 A bit further along the path were some Crimped Gill brackets, a species only added to the Norfolk list in the past five years but now relatively common, a late Fly Agaric, some Green Elf Cups and the contorted variant of Pipe Club. There were two new species for me, Dingy Twiglet and the sclerotia of Typhula phacorrhiza. 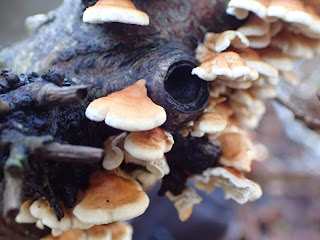 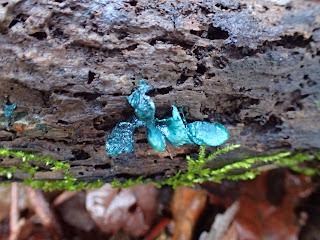 We had a room at Bawdeswell village hall booked for lunch, a planning meeting and a presentation of notable fungal finds this year, so after a couple of hours we turned back and headed for Bawdeswell. The village hall was very modern and the staff friendly - certainly worth considering if you are looking for a venue out this way. We thrashed out a prospective foray programme for next year and went over some of the interesting things that members of the group had found.

Many thanks go to Steve Pinnington for organising the forays this year, and of course to Tony Leech and everyone else who has attended and helped identify all of the species we find.
Posted by James Emerson